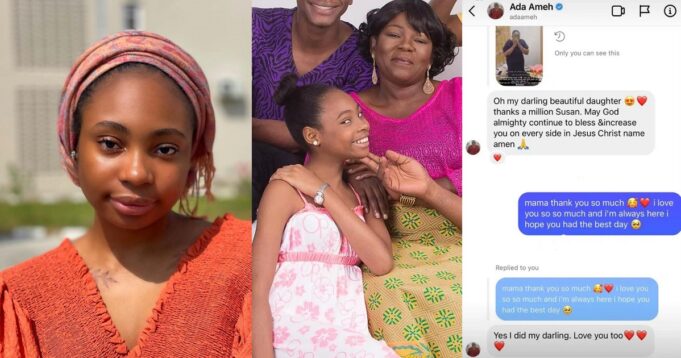 Actress and influencer, Susan Pwajok otherwise known as Blessing on ‘The Johnsons’ show, has taken to social media to mourn the sad demise of her screen mom, Ada Ameh.

The deceased actress who slumped and died on Sunday, July 17, in Delta state, played the role of ‘Emu’ on the popular TV sitcom and was a mom to four children, including Susan.

Susan who was distraught by the news of Ada’s death, took to her Instagram page to disclose that she was a motherly figure to her in reality and not only in the movie.

She shared screenshots of their conversations to show that the late actress cared and loved her liked she was her biological daughter.

Ada Ameh would check on her occasionally, shower prayers on her and reprimand her whenever she errs.

She added that the late actress was very present in her life and never missed any milestone in her life since she was in primary school.

Read the chats below,