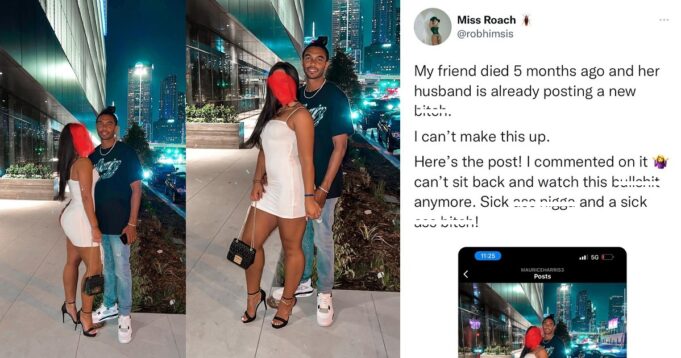 A lady has called out her late friend’s husband for posting another woman on his social media page barely five months after her demise.

The aggrieved lady, @robhimsis, took to Twitter to lambaste the man, identified as Maurice Harris, for disrespecting his wife, Kayla’s memory by posting a picture of himself posing with another woman in an intimate way.

It was gathered that Kayla, a mother of four, passed away suddenly on March 12, 2022, at her home in North Carolina.

“My friend died 5 months ago and her husband is already posting a new bitch.

I can’t make this up.

Here’s the post! I commented on it 🤷‍♀️ can’t sit back and watch this bullshit anymore. Sick ass nigga and a sick ass bitch!

I wasn’t expecting this to go viral but now that it has and I see some of you ASS CLOWNS defending this weird ass behavior and excuse it as grieving let’s get down to the gritty. My friends husband has been a piece of shit and put Kayla through absolute hell.

First of all, he had a WHOLE child on her while they were married, and my friend Kayla damn near took that baby in as her own cause she really was that strong of a person she decided to keep her family together. The child is even listed in her obituary as her OWN.

Let me not forget to mention that this mf had a BITCH IN THE HOUSE his wife died in FIVE DAYS after Kayla passed away. FIVE DAYS. Is that excused too? Is that long enough for you MFs or that’s just grieving too? This mf been partying and outside since she died.

We have not seen one tear fall from this niggas eyes bro. NOT ONE. I have spoken on the phone and FaceTimed him multiple times. No emotions. No fucks. Everyone is still grieving Kayla, and you feel the need to POST ON SOCIAL MEDIA A BITCH YOU were probably cheating with? CLOWN”