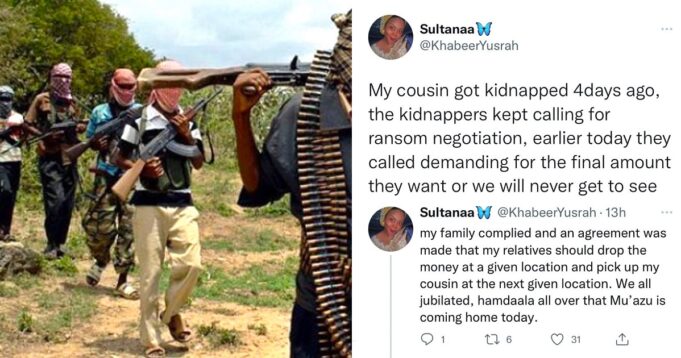 A lady has lamented bitterly after kidnappers who abducted her cousin refused to release him despite collecting ransom from their family.

@KhabeerYusrah took to Twitter to reveal that her cousin was kidnapped four days ago and his abductors called their family to demand for a ransom to secure his release.

She said they agreed to the kidnapper’s terms and went to the provided location to hand over the ransom but the kidnappers zoomed off after collecting the money and didn’t release her cousin.

According to her, it’s been hours since the kidnappers collected the ransom yet they have not called to disclose where her cousin is.

“My cousin got kidnapped 4days ago, the kidnappers kept calling for ransom negotiation, earlier today they called demanding for the final amount they want or we will never get to see him again, my family complied and an agreement was made that my relatives should drop the money at a given location and pick up my cousin at the next given location. We all jubilated, hamdaala all over that Mu’azu is coming home today.

They got to the location and handed the money to them waiting for them to hand over muaz but these wicked people zoomed off with the money without returning Mu’az💔12hours later no phone call or message from them.Inalilahi waina illaihi rajiun. We don’t know if he’s alive or not.

Nigeria is doomed, our government have failed us over and over again. Just for me to wake up to that terrifying video of the Abj-kd train victims Ya Allah ka kawo mana karshen fitinar nan. La ilaha illa anta subhanaka inni kuntu mina zalimin”