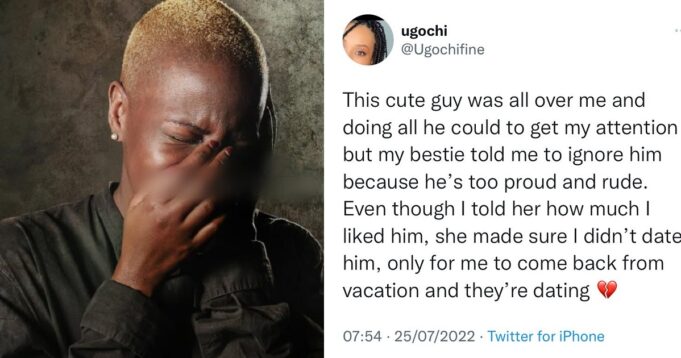 A heartbroken Nigerian lady has narrated how she lost an admirer, who she was also in love with, to her best friend.

The lady simply identified as Ugochi, who shared the heartbreaking incident on Twitter, said she was in love with the young man who tried all he could to get her attention. However, rather than letting him know how she felt, she opened up to her best friend, who, unknown to her, was also interested in the same man.

According to her, her best friend advised her to ignore the man because he’s too proud.

She said it was to her utmost shock when she returned from vacation to see that the said man and the best friend who had advised her against dating him were now an item.

Narrating the heartbreaking incident on the micro-blogging platform, she wrote,

“This cute guy was all over me and doing all he could to get my attention but my bestie told me to ignore him because he’s too proud and rude. Even though I told her how much I liked him, she made sure I didn’t date him, only for me to come back from vacation and they’re dating 💔”.