Home Viral Lady left in shock after her boyfriend pulled an expensive ‘joke’ on... 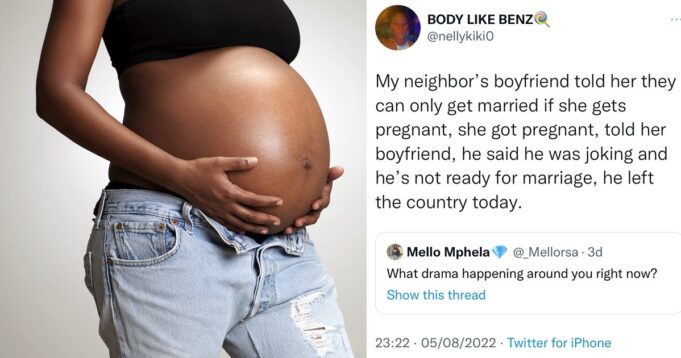 A Twitter user, @nellykiki0, has narrated how her neighbour was left heartbroken after her boyfriend pulled a rather expensive joke on her.

Taking to the platform, Kiki disclosed that her neighbor’s boyfriend had told her he can only get married to her if she gets pregnant for him first.

The young lady went ahead to intentionally get pregnant only to receive the shock of her life when he told her he was only joking and wasn’t ready to settle down yet.

It was also revealed that the young man has relocated abroad, leaving his pregnant girlfriend to carry her cross alone.

“My neighbor’s boyfriend told her they can only get married if she gets pregnant, she got pregnant, told her boyfriend, he said he was joking and he’s not ready for marriage, he left the country today.”

The incident has stirred reactions on social media, with netizens berating the young man for deceiving his girlfriend.

@notthatphumi wrote, “For her sake I hope she deleted that baby expeditiously”

@jelilat_oj wrote, “Lmaoo
He is not ready for marriage but he can do what married people are doing…
I just hope and pray my gender fall inlove with their head.”

Which kind smelling ultimatum be that ??? Why the actual fuck are you getting pregnant in hopes someone wifes you