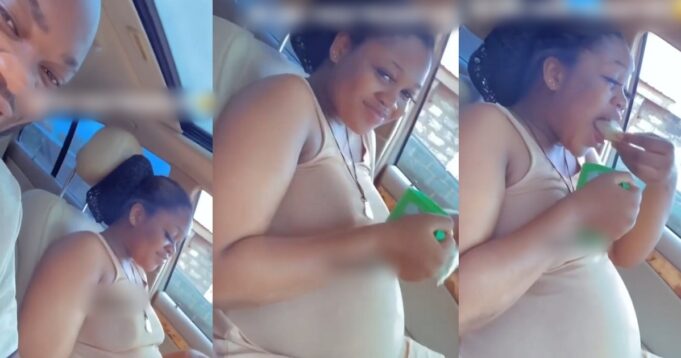 He made a video showing himself and his spouse who was already enjoying her highly craved breakfast. He’s heard saying,

When he then challenged her about the health risk of the food she was having, she responded to him saying,

No weapon fashioned against me shall prosper

He later asked her if now, he’ll have rest of mind since she’s gotten what she wanted to which she replied saying she doesn’t know. She then went on to tell him of the irony of her cravings as though they had tea in their house, she just wanted that of the street’s Aboki.

In other news, a lady took to her social media page to share the collection of mouthwatering meals she makes for her man and netizens have been left in awe over how adorable the video is.

TikTok user, @ayoandfola made a video which shows the couple of times she’s served her man meals that are appealing to the eyes and mouth.

In the lovely video, the gentleman is seen appreciating his babe each time she serves him food saying “Thank you, baby” with a smile on his face.

The loveliness of the video and the fact that the gentleman is certainly having great dishes served to him everyday has left a lot of netizens to react, with many envying him.