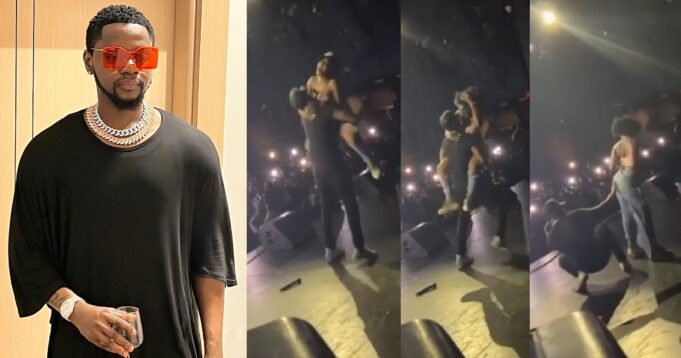 Popular Nigerian singer, Kizz Daniel has disclosed that he has employed the young lady he rocked on stage during a recent performance.

While performing at his Afroclassic World Tour 2022 in the US, the ‘Buga’ crooner had a steamy moment with the female fan.

He brought her up on stage to dance like some artistes do and touched her derriere then proceeded to lift her off the floor. After the rather steamy moment, he told her to send him a DM on Instagram.

Speaking on the performance in a recent interview with Charlamagne Tha god and Angela Yee on “The Breakfast Club” show, the father of two revealed that he has employed the lady and that she even came along with him to the said interview.

When asked if he has ever considered toning down the way he ‘expresses’ himself with ladies on stage, Kizz Daniel said he always seeks the consent of the ladies’ before groping or doing anything sexual with them.

Watch the interview below,

A while ago, Kizz Daniel responded to a Twitter user who made an unusual request from him.

The Twitter user who happens to be a lady, took to the micro-blogging platform to say she has heard rumours that Kizz Daniel is close-fisted and doesn’t like giving people money, so to prove the rumour wrong, she asked the singer to gift her N100k.

“Vado I hear rumors that you are stingy kindly prove them wrong and dash me 100k”, she tweeted.

The tweet caught the attention of the “Vado D Great” and he responded, saying people should continue thinking that he’s stingy because he has no intention to prove them wrong.

He wrote, “No worry I am stingy 🙏🏾 I prove nothing wrong”