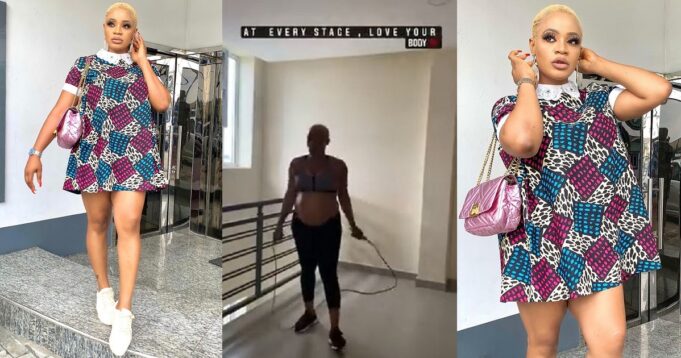 Nollywood actress, Uche Ogbodo, has taken to social media to admonish her female fans to love and appreciate their bodies at every stage of life.

According to her, the human body is the greatest asset and needs to be treated as such.

The actress gave this advise via her Instagram page as she shared an inspiring video of herself exercising, while flaunting her baby bump.

“Love your Body at Every Stage of Life. Our Bodies are our Greatest Asset . Treat your bodies right. My ladies pls Follow the process , no be magic ooo #ucheogbodofitness.”

This is coming after the actress took to social media to reveal that she is pregnant with her second child.

The actress, whose marriage crashed in its 10th month in 2013, showed off her baby bump in new photos shared on Instagram.

The 34-year-old movie producer pulled a fast one on her fans as she celebrated two years of celibacy in January, 2021.

In a post shared via Instagram, she said being celibate for 2 years was tough but she is excited that she achieved the feat.

Sharing a photo of herself in a full-length dress, she wrote,

“Since I went back to being a Virgin, my life has indeed taken a new turn. 2 years Celibacy no be Beans. I am so happy.”

In an unexpected twist, the thespian has unveiled the “Bunny in the oven” as she jets off to an unknown destination.