Home Viral Man emotionally blackmailed by his bereaved friend for not giving him N200K... 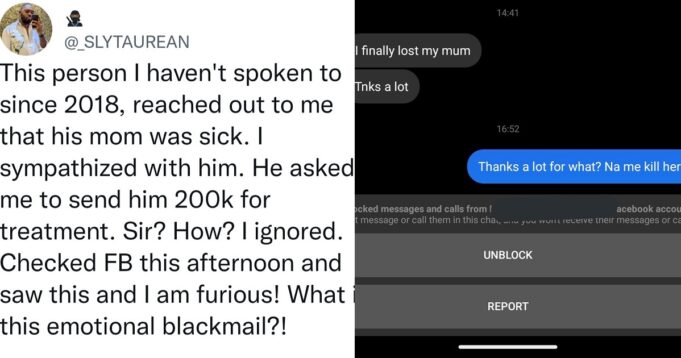 A Nigerian man has narrated how a Facebook friend tried to emotionally blackmail him for not rendering help when his mother was sick.

According to him, the friend had reached out to him to beg for two hundred thousand Naira to treat his sick mother.

However, he was also low on funds at the time, so he told him he didn’t have the money.

Unfortunately, the friend’s mother died, and he came back to his DM trying to guilt-trip him for not being able to help with the money for his mother’s treatment.

“I finally lost my mom, thanks a lot,” he wrote, making it appear as though his mother passed away as a result of his refusing to give him the loan.

Sharing a screenshot of the friend’s message, the Twitter user wrote,

“This person I haven’t spoken to since 2018, reached out to me that his mom was sick. I sympathized with him. He asked me to send him 200k for treatment. Sir? How? I ignored checked FB this afternoon saw this and I am furious what is this emotional blackmail. Ok when I mean spoken to, I mean tested. Coz we not friends irl. Just an FB friend back when I used that app”.