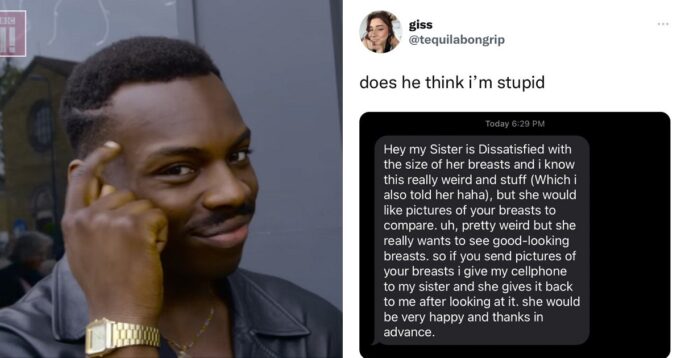 A Twitter user has taken to the micro-blogging platform to share the interesting tactic a desperate man employed to get her to send her nude photo.

@tequilabongrip shared a screenshot of the message she received from the young man requesting for a picture of her bare boobs.

Instead of asking for the nude picture directly, the man claimed his sister is insecure about the size of her breasts and wants to see the picture of another woman’s breasts to compare with hers.

He then told her to send a picture of her own boobs so he can show it to his sister.

Reacting to the humorous message, the lady wondered if the guy thinks she’s dumb to believe his claim.

“Hey my sister is dissatisfied with the size of her breasts and I know this really weird and stuff (which I also told her haha), but she would like pictures of your breasts to compare. uh, pretty weird but she really wants to see good-looking breasts.

So if you send pictures of your breasts I give my cellphone to my sister and she gives it back to me after looking at it. She would be very happy and thanks in advance.”