Home Viral Man gets heartbroken as he finds out his friends slept with his... 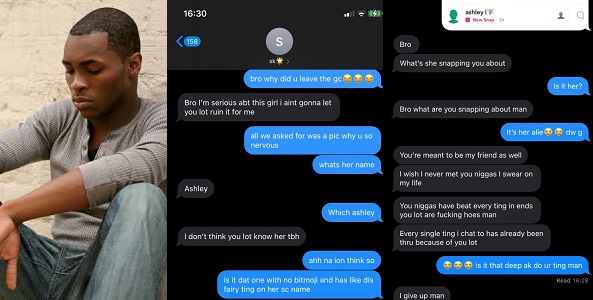 A man seeking to protect the new love of his life from the preying hands of his friends has been hit with a huge shock after finding out that they’ve already slept with her.

A Twitter user shared screenshots of a chat with the affected man and how he got to discover that his Casanova friends have already had relations with the woman he was probably considering for marriage.

In the chat, a friend of his was asking him why he left their group chat and he revealed that it was because they were requesting for her picture but because he knew about their playboy lifestyles, he did not want to ruin his relationship by showing her photos to them.

However, as the chat proceeded, the man told his friend that her name is Ashley, only for him to realize that they already knew her.

He eventually accepted his fate by stating that he gives up.

Read the chat below: