Home News Man who killed a 26-year-old lady and buried her in his room... 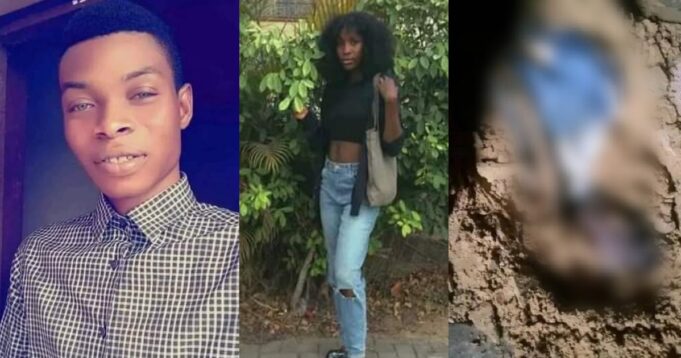 A young Nigerian man, Joseph Fekala, who was arrested for killing a lady, Kate Oguoh, and burying her corpse in his room in Bayelsa state has narrated how he carried out the dastardly act.

Last week, Yabaleftonline reported that Joseph, said to be a suspected Yahoo boy, killed the 26-year-old lady in his apartment at the Okaka area of Yenagoa, Bayelsa State. ICYMI

The suspect was paraded before newsmen recently and he explained how and why he murdered the young lady.

According to him, Kate sought refuge in his two bedroom flat in February and had been staying with him since then, until he got a job in Port Harcourt and had to relocate but left her in his house.

In July, she transferred N50,000 to his bank account to help her trade in Forex with the intention of getting N20,000 interest monthly which he said wasn’t possible.

When he visited Bayelsa last week, he got into an argument with Kate over the money as he had squandered it and in the process choked her to death because he didn’t want her to raise alarm.

According to him, he is not a yahoo boy and he didn’t intend to use her for money ritual.

“We got into an argument over the N50,000 she sent to me for the suppose of forex trade she wanted to do. I tried to explain that I spent the money and will repay her but she angrily responded and pushed me. So I pushed her back and she fell on the bed, and since I knew she was going to raise alarm and our neighbours will hear her voice so I held her throat and closed her mouth, and choked her to death.”

“On the first of July I came to Bayelsa State to do some maintenance in the house because Kate met me in February that she needed a place to stay, based on the fact that the person she wanted to go stay with in Lagos didn’t work out, so she needed where to stay for four months.

So I gave her one of the rooms, and I was staying in the parlour, in a two-bedroom flat. I just got a job so I have to leave for Port Harcourt. I use to visit home to do some maintenance occasionally. So on the first of July when I came we met and as we were discussing, so she told me she wanted to trade forex since she knew some years back I used to trade for myself.

So I explained to her that the best I can do is teach her how to trade, and not trade for her because of the inconveniences in it. Later she left for her family house in Opolo and called me to send her my details, and she immediately sent me N50,000.

When I asked her the following day, she said she wanted me to trade for her, so I reminded her that I don’t want to be involved so she insisted, so I accepted.

So I asked her what she want from this thing and she said at least N20,000 every month, so I told her no institution or bank will offer that.

So I asked her to send her details so I can refund the cash, so later she started sending my colleagues at the office messages that I’m a scammer and criminal.

I tried chatting her up but she won’t want to listen, so I told her I will come to Bayelsa State since we can’t settle the issue on phone. So I came to Bayelsa this past Monday, I got home late at around 9 pm, and I met her inside and tried talking to her but she responded angrily back at me, I tried to calm her but she won’t agree.

I lay down to rest and she was still raising her voice at me for over 20 minutes so I slept off that day. The following day I decided to stay back for a few more days because I didn’t want to let it get to the hearing on my colleagues at work, and the chances of her doing that were high.

I came back on Thursday, and when she saw me, she was still angry. Then I pleaded with her that she should be patient with me, that I will raise the cash and refund her with interest when I get my paycheck, so she said even if she agrees it will be N20,000 interest. I declined that it was not up to one month and it won’t be possible, except at the end of August but she didn’t agree and she kept on talking and pushing me that she was going to deal with me through her aunty who is a police officer.

After I noticed she has given up, I went out to clear my head, as I was walking a thought came to me that I should just bury the body so everything will just pass. I borrowed a shovel around, I looked for the portion of the house that wasn’t too hard, so I dug it and left her inside the pit.

The fear of getting into trouble made me not report to the police. I’m not a yahoo boy and I didn’t kill her for rituals.

The following morning the mum came around and said she was looking for her daughter, and that was the first time I saw her, the daughter probably gave her the spare key to the house. She came the night before the incident but didn’t meet me.”