Home News Many Injured As Hotel Collapses in Delta 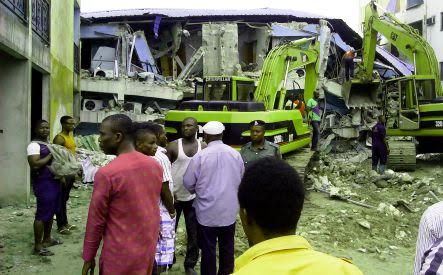 Apparently, No fewer than seven people sustained injuries after a popular hotel, the Mekaval hotel situated in Effurun-Warri in Delta state collapsed at about 2am yesterday, September 9th.

The injured were mostly indigenes of neighboring state who had come to the state in search of a miracle at the Christ Mercy Land Church, headed by one Pastor Jeremiah Fufeyin, popularly referred to as ‘Ijaw TB Joshua’.

Delta state deputy Governor Kingsley Otuaro, who visited the scene of the incident attributed the cause of the collapse to structural defect.

“The state government has ordered that the hotel be closed immediately to avert further loss of lives. We are going to send engineers straight away. It is very possible that there have been some structural defect ab initio during construction works because that place seems to be a waterlogged area and maybe the proper engineering works were not done.” he said

One of the victims of the incident, Adeza who is an ADC to one of the northern state First Lady, said she was in the state to seek for spiritual help for her many family troubles

“I am a Muslim, but I came here to see the man of God. Only recently I lost my elder brother who was in the Army and so many things had been happening in my family. So I came here for prayers.”she told The Nation