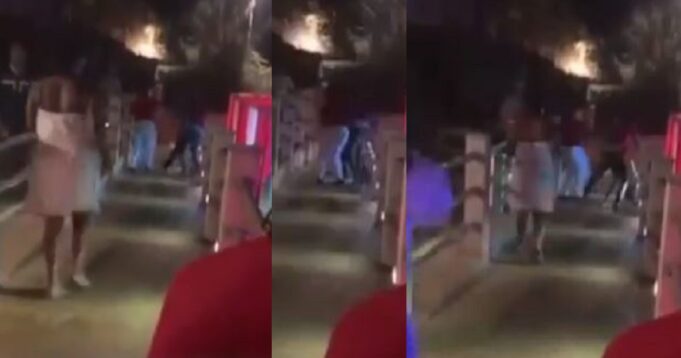 A viral video has captured the moment a married man allegedly nabbed his wife celebrating valentines with another man in an hotel.

It was gathered that the lady although married went to the hotel with her lover on February 14th, to have a nice time.

The video serving rounds online showed the distraught man in a heated argument with another man, said to be his wife’s lover who brought her to the hotel.

Onlookers at the scene tried to salvage the situation, while a lady was heard saying “the girl is married”.

Married man catches wife celebrating Valentine in a hotel with her lover pic.twitter.com/RFaiieuLuT

In other news, a video that was shared on the internet recently captures the moment three ladies were exchanging blows with each other inside what is said to be a hotel.

Reports surrounding the video have it that all three ladies were dating the same man who happened to be in a hotel room with one of them.

In an undisclosed how, the other two ladies got information of what was happening and stormed the hotel, with one coming in company of a friend.

And as soon as they amalgamated, words wouldn’t do justice to the emotions they needed to pour out and so, fisticuffs spoke for them.

In the video, two of the ladies are seen seriously exchanging blows as the man in question, came out of the room. The encounter got quite messy that one of the ladies was stripped during the fight.