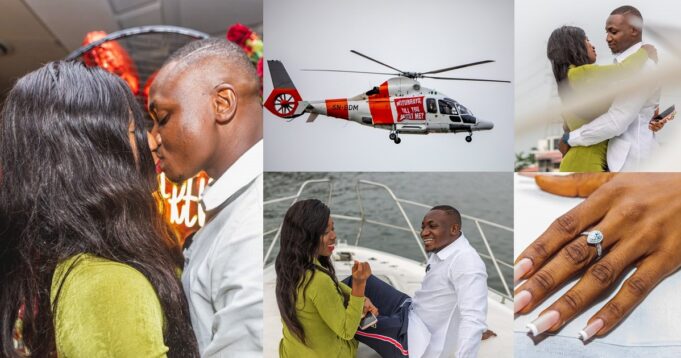 Congratulations are in order for popular Twitter influencer, Pamilerin Adegoke, as he proposes to the love of his life, Motunrayo.

Pamilerin who seems to be bent on winning the “lover of the year” award has once again raised the bar for his fellow men as he proposes to his girlfriend with a yacht and an helicopter.

It would be recalled that the media personality caused a buzz on social media on Valentine’s Day after he rented two billboards in the heart of Lagos to celebrate his girlfriend. Read here

Well, to pop the big question, Pamilerin took it up a notch by renting an helicopter and a yacht and hosted an intimate dinner afterwards with close friends in attendance, including popular singer Timi Dakolo.

“Told @motun_xoxo I have a luxury shoot i want to do for a brand. We started brainstorming together.

Called my business partner @stephen_kobams to ask for his opinion, and he suggested I use a yacht (unknown to her that it was already planned).

Asked her if she would love to feature in the content creation since it’s lifestyle and she said yes (Thank God 😂). What if she had said no 😂😂😂

Boom, we started planning for the Big Day, Stephen as usual (with his super big ideas) said we have to rent a yacht and a small boat 😭 (this boy wants to send me back to the trenches, does he think I have money 😞 it’s fake life I’m living ooo 😂)

I said no Wahala, let’s get to work. We contacted @autogirlng and she got us one of the finest 😍. I said thank God it’s sorted, then Stephen came again. Pamilerin I have a big idea 😂 you need to see the way I looked at him. He said you rented billboard for Valentine, We can’t be ordinary for the proposal 😔 (We ke 😂 who is spending the money, me not we 🚶‍♂️). He said let’s rent an Helicopter. For what 😂😂😂

Helicopter to fly the “Will you marry me banner” 🤦‍♀️ egbami.

We reached out to @verifly and they responded immediately. The D day was approaching. I was on the phone with @timidakolo and told him I was going to propose. He said, so I did not plan of telling him that’s he’s coming. Thank you uncle Timi.

To cut the long story short, make una start to dey save money ooo.. we have a wedding to plan, sorry I’m getting married. I don leave grooms man duty for una 😂😂

Watch a video of the proposal below,