Home Entertainment News “I might become an Alhaja for real” – Actress Mercy Aigbe... 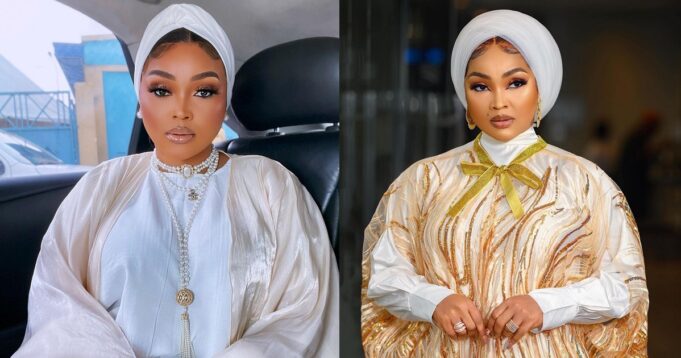 Nollywood actress, Mercy Aigbe, has revealed that she’s considering converting to Islam while she gushed over her new mode of dressing.

The mother of two, who recently tied the knot with movie producer Adekaz, who’s a Muslim, made this revelation in an Instagram post on Monday, July 4.

According to her, she is enjoying her new mode of dressing and may ultimately decide to become an Alhaja.

Speaking further, she averred that we all serve one God and that’s what matters.

“Let me not lie, I am enjoying this new Hajia looks😄 😍 I might just become an Alhaja for real, the thing is sweeting me 😂😂😂 but o ma le di e jare! At the end we serve one God 😍❤️🙏🙏”

In other news, the award winning Nollywood actress has showered praises on herself while reflecting on the effort she put into becoming successful.

The 43-year-old mother of two who took to Instagram to share adorable photos of herself in a white suit, highlighted all her positive qualities while she noted that she would detail her struggles and journey to stardom someday, to motivate her fans.

“WCE ,…Today I celebrate this strong, hardworking, smart, intelligent, prayerful, focused , down to earth, talented , woman ‘MERCY’ against all odds you triumphed ! I know everyone has a Story! I am not one who likes to talk much but one day I will open up and share my struggles! I will share my story! If for nothing to inspire and motivate someone out there! It has been God and God only! 🙏 Grace to Grace! Standing Tall!” She wrote.