Home Viral Moment an American woman discovered she has been ‘catfished’ by someone pretending... 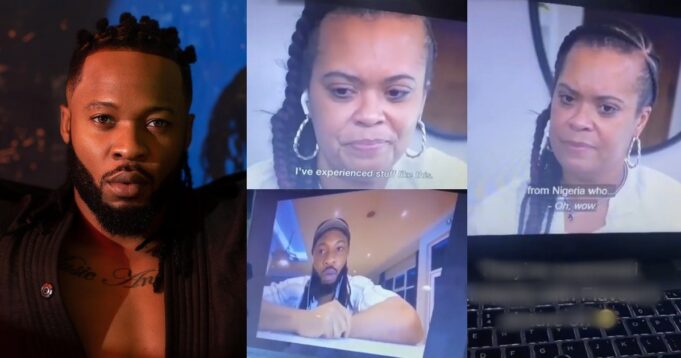 A video showing the moment an American woman discovered that she has been ‘catfished’ by someone posing as popular Nigerian singer, Flavour, has gone viral.

The not-so shocking discovery was made on an episode of MTVCatfish when the singer was contacted by the show host to inquire if he knows the young woman, identified as Kimberly.

Apparently, Kimberly had been chatting with someone pretending to be the ‘Nwa Baby’ crooner for about six months and believed it was the singer.

However, when Flavour was contacted on video call, he said he doesn’t know the woman and noted that this is not the first time he’s meeting someone who has been deceived by someone pretending to be him.

To prevent a reoccurrence, the Enugu-born singer noted that all his social media accounts are verified and he doesn’t give out his personal information to strangers.

The 38-year-old music star who was sympathetic towards Kimberly, then apologized to her over the traumatic experience.

A while ago, a Russian woman inked the face of popular Nigerian singer, Flavour on her body as she declares her love for him.

In a video serving rounds on social media, the Moscow-based white lady revealed she got her first tattoo of the singer’s face on her shoulder in 2015.

Flaunting her latest tattoo, the woman identified as Marina, disclosed that she inked another tattoo of Flavour on her left arm just to show how dear his songs are to her.

Marina who dubbed the ‘Good woman’ crooner as the best singer said, “For many years I like one big Nigerian singer, he’s Mr Flavour… I really like his songs, for me he’s the best, so because of this I put on my body, some tattoo of him”.