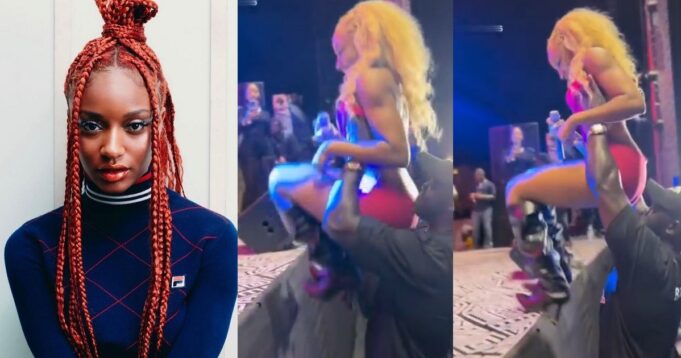 Fast-rising Nigerian singer, Ayra Starr performed at an event recently where she got down from the stage just so she could get close to the energetic crowd.

However, when she was going to get back up to the stage, it took the strength and bravery of a security personnel to help her up.

In a video that a number of social media users have deemed cute and adorable, Ayra is seen being lifted by the able-bodied bouncer who carefully lifted her up on the heighted stage, like he was only lifting weights in the gym.

After she gets back on stage, she continues to perform her hit track, “Away” which was one song that threw her into the limelight.

Watch as you scroll,

Ayra recently responded to a troll who slut-shamed her on Twitter.

The Mavin signee had taken to the micro-blogging platform to post a jaw-dropping photo of herself as is her usual fashion and dropped a subtle hint about releasing a new track.

However, the troll decided to share his unsolicited opinion about her and called her an award-winning prostitute.

According to @illelaboyeG, the “Bloody Samaritan” hitmaker has a degree in acting like a cheap call girl.

The tweet caught the attention of the singer who directed the insult back to his mother at home.