The President of France, Emmanuel Macron was slapped in the face during a crowd walkabout session in Southeastern France.

The embarrassing incident happened today, June 8, and the video has since gone viral.

In the video making rounds on social media, President Macron could be seen walking towards a crowd of well-wishers who were standing behind a barrier.

The President stretched out his hand to shake a man in a green T-Shirt, with glasses and a face mask. However, his gesture was met with a resounding slap.

Macron’s security detail quickly intervened and pushed the man to the ground, while the president moved away from the scene.

According to reports, two men have been arrested in relation to the incident.

Mr Macron reportedly paid a visit to the Drome region to meet restaurateurs and students to talk about how life is returning to normal amid the COVID-19 pandemic. 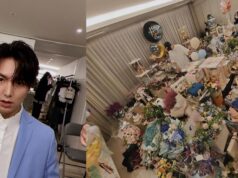 South Korean actor, Lee Min-Ho, shows off the gifts he received on his 34th birthday