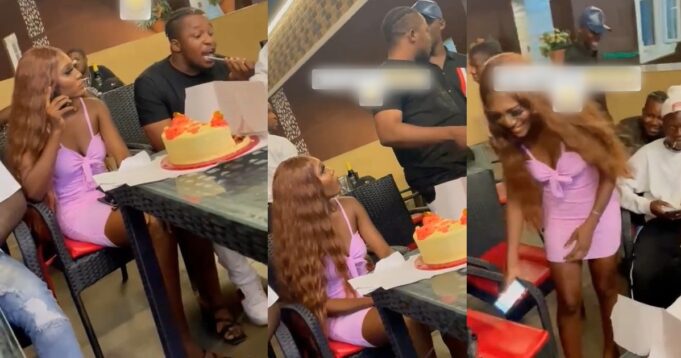 A Nigerian guy proposed to his girlfriend in a rather unique and pretentious way and the video capturing the moment of his proposal has had tongues wagging on social media.

The guy’s partner is seen seated by his side with a couple of guys surrounding in a gathering that looks to be for the lady’s birthday. A cake is placed on the table where they are gathered, alongside other things to show a celebration was going on.

In a rather surprising moment, the young man is heard shouting at someone who he supposedly was on a call with, threatening to deal with the person because of the things they were saying to him.

He later ends the call and accuses his partner of being the cause of the aggressive phone he’d just had. Perplexed, the lady begins to ask who it was that called him, while the rest of his friends try to calm him down and ask what transpired.

He then goes on to say the person who had spoken with him, called to threaten him for taking his girlfriend out on her birthday… this led the lady to continue to ask who it was and even ask for the phone number of the person.

Moments later, as the situation seemed heated, the guy with a ring, then went down on one knee when the lady had turned around from him. After she was beckoned upon, she then turns around to see her man asking her to be his wife.