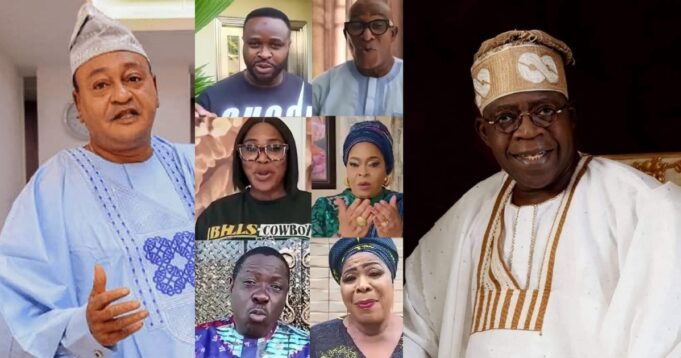 Veteran Nollywood actor, Jide Kosoko and other actors in the Yoruba movie industry, have declared support for the presidential candidate of the All Progressives Congress (APC), Asiwaju Bola Ahmed Tinubu.

The veteran actor took to his Instagram page to pledge his allegiance to the ruling party’s presidential flagbearer while sharing a video of his colleagues including Fausat Balogun, Yinka Quadri, Taiwo Hassan, Faithia Williams, Femi Adebayo, Shola Kosoko, Saheed Balogun, Eniola Ajao, Murphy Afolabi, himself and a host of others drumming support for Tinubu.

He also appealed to Nigerians to give the former Lagos state governor a chance to become President because the country needs him.

“I stand with Tinubu. I have witnessed his achievement as a Genuine Leader over the years, his support for humanity and the creative industry in particular. I am convinced he is a lover of old and new, especially the youth, considering the number he has raised politically, Majority of who are doing well as leaders today. Meaning he believe so much in youth as leaders of tomorrow as in today. Please give him the opportunity to complete transferring the technical know how on his God choosing assignment. ignore hate speeches by opponents and enemies. HONESTLY WE NEED HIM.Let it not be another best president we would not have. Arise larika, arika baba iregun.”