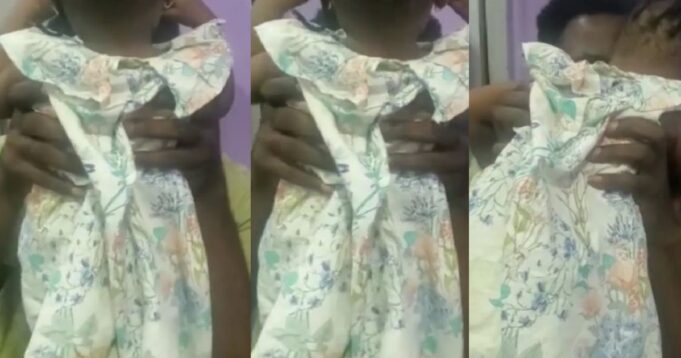 The mother of a 13-month-old baby is crying out for justice after her daughter was allegedly defiled at school.

It was reported that the little child was dropped off at school in Ojota, Lagos, on Monday, July 4. However, when her mother picked her up from school later that day, she said the child had bruises, swellings, blood stains, and whitish deposits all over her thighs and private areas.

According to the mother, a test was conducted on the child the following day, and the result showed she had been defiled.

The baby is said to have been severely ill since then.

Sharing the heartbreaking incident on her Instagram page, along with a video of the little girl, comedian Lepacious Bose wrote,

“A 13 months old baby abused in school. in school ooo! This defilement thing is getting crazier by the day! Pls see full video on @auntlanda page, am not livid to think straight!

On Tuesday, July 5, 2022, Princess was taken to Oregun Primary Health Centre, who examined Princess and confirmed that she has been defiled and her hymen was not intact. However, when they had the name of the school, Lohims Academy Ojota, where the incident took place, they flipped, claiming that Princess just has diaper rash, that it was nothing. However, they referred them to Ojodu Primary Health Center, claiming that there is an agency there that handles defilement.

However, when Princess’ parents challenged the doctors at Ojodu Primary Health Centre, they were given Laboratory Request Paper to run some tests in their laboratory. The laboratory official requested for payment for the tests but Princess’parents made them to understand that the doctor already told them that the do not need to pay. Only RVS test was conducted on Princess, they claimed that they do not have Rape Kit available, and gave them some supplements, antibiotics, and HIV-prevention medications for Princess.

Today, Wednesday, July 6, 2022, Princess was taken to Police Hospital Falomo, Lagos, where it was yet confirmed that Princess was defiled. But because the incident was more than 48 hours old, the sperm evidence were no longer available.”