Popular Nigerian Disc Jockey, DJ Spinall has confessed that nice boobs and good people inspire him aside from music.

The Disc Jockey made this statement while responding to the question of fan who asked him what else inspire him aside from music, which he responds to be good people and nice boobs.

He later joined Industry Nite where he promoted underground talents at the weekly platform. He was the official DJ to Wande Coal while he was affiliated with Mavin Records. 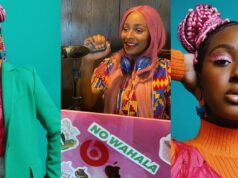 Thank You Ghana For Bombarding Me With So Much Love –...