Home Viral Nigerian man finds out fiancée he took to UK has been cheating... 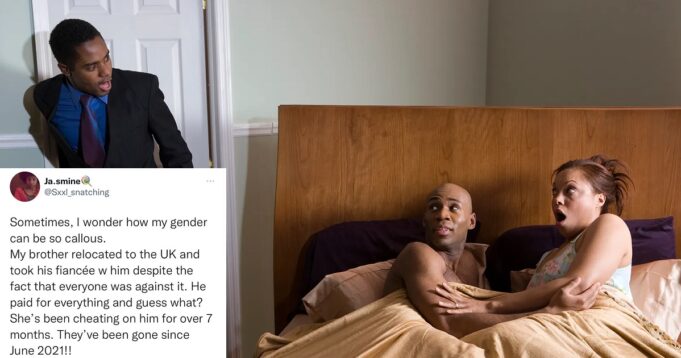 A Nigerian lady has taken to Twitter to share the heartbreaking story of how her brother discovered his fiancée had been cheating on him for months.

According to Twitter user @Sxxl_snatching, her brother sponsored his girlfriend to the UK to further her studies and they both relocated out of the country in June 2021.

She said he was warned by their friends and family not to take his girl abroad but he remained adamant and proceeded with the travel plans.

Sadly, he recently found out that she has been cheating on him for seven good months in the UK.

“Sometimes, I wonder how my gender can be so callous.
My brother relocated to the UK and took his fiancée w him despite the fact that everyone was against it. He paid for everything and guess what?
She’s been cheating on him for over 7 months. They’ve been gone since June 2021!!

In other news, an overly excited lady heaped curses on her ex-lovers after her current boyfriend showed her a new level of love and care.

The young lady, who appeared to have had bad experiences with love in the past, was treated to a special treat by her new boyfriend on her birthday.

In the viral video, the woman was escorted into a room that was stocked with gifts. The room was filled with gifts from her lover, including a sizable money cake, clothing, and balloons, to name a few.

Filled with joy and excitement, she leapt around gleefully, cursing all her ex-boyfriends who never treated her to such surprises.