The monarch of Owoland in Yewa south local government area of Ogun state, Patrick Fasinu was brutally murdered by assassins.

According to report, the monarch was set ablaze with his car on Wednesday on the road between Ijako and Isagbo in Oke-Odan area, bu the information became revealed yesterday, July 28.

A son-in-law, Siyanbola Biodun Naheem took to his Facebook page yesterday to drop his condolence on the death of the Yoruba leader.

“It was gathered that the monarch was coming from Ilaro but dropped his driver somewhere in Owode and drove alone towards Owo only for him to be attacked on the road where he was killed and set ablaze with his car.”

Investigation to know more about the assassination is ongoing, according to the Police. 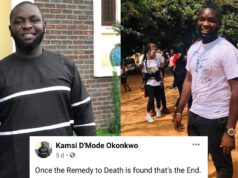