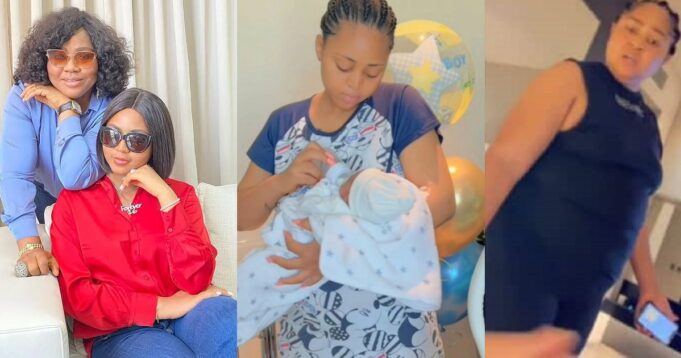 Popular Nollywood actress and nursing mother of two, Regina Daniels, and her mother, Rita Daniels, have stirred hilarious reactions with a recent exchange that ensued between them.

The billionaire wife welcomed her second child with her husband, Ned Nwoko, a few days ago, and as in the African tradition, it appears her mother has arrived for traditional after-birth care, popularly known as Omugwo.

Well, from the recent hilarious exchange between them, Regina may not have the liberty to satisfy her cravings at this time.

In a video that the new mom shared on Snapchat, her mother was seen complaining bitterly about her diet.

In the video, Rita chastises Regina for consuming sweet foods and warns her to be careful what she eats because she is breastfeeding.

As Rita complained, Regina was heard giggling and telling her mother that she is a breastfeeding woman and can eat whatever she likes.

However, Rita, who doesn’t seem to agree with Regina on that, complained about how she had been changing the new baby’s diaper because he had been pooping a lot because of Regina’s diet.

“Are you okay? You’re eating all these sugary things and look at the baby pooping like what I don’t even know what to call it. Look at the cake in the name of Moon, ‘Moon is still celebrating his birthday’.

“How many cakes has Moon eaten? You’ve been the one eating and then you ordered for the second one again. You will now use coke to wash it down all in the name of you’re a breastfeeding mum. Who taught you that?” Rita scolded Regina.