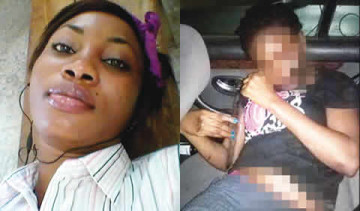 Kemi, who the family claimed was Olugbore’s lover, was found dead in the ex-SSA’s apartment on Saturday, August 8, 2015

Punch Metro gathered that Kemi, an event planner, came from Lagos to visit Olugbore in Osogbo, the Osun State capital, on Thursday, August 6, and promised to return on Saturday.

Kemi’s family, however, got a call on Sunday that the lady had been electrocuted in the ex-SSA’s apartment, and her corpse had been deposited in a mortuary.

READ ALSO: Girl Murdered By Soldiers Over Indecision Of Who Would Rape Her First

The matter was reported at the Dada Police Division, and policemen from the station removed the corpse from the apartment. The ex-SSA was arrested thereafter. The deceased’s elder brother, Ayoola, who confirmed the death of his sister on Tuesday said Kemi had known Olugbore for about four years, but the family initially did not know about their relationship.

He said he, Kemi and Olugbore were members of the same church in Lagos, adding that her sister told the family that the suspect had separated from his wife, who had three children for him.

“My sister travelled to Osogbo and she was supposed to return to Lagos on Saturday, but we got a call from the police that she was involved in an accident and it was very serious.
“When we got to Osogbo, the police prevented us from seeing her, but told us that she had been electrocuted by an electric fan, but it is unbelievable.”

Ayoola, said the explanation sounded illogical as there were no traces of burn either on her body or on the fan.

“However, we are waiting for the outcome of the autopsy which was done on Saturday. We have known Bode (Olugbore) for a while. He works with the Osun State Government. Kemi was also gainfully employed, having finished from the university.
“We were made to understand that she was electrocuted in the apartment by a standing fan. That is very hard for me to understand. The police showed us the fan, and it seemed to be working fine. It was not burnt. The socket was not burnt. So, it is suspicious that she was electrocuted. The current in a fan is not enough to kill except one has direct contact with a live wire. The marks on her body suggested something contrary.“Right now, everyone is waiting for answers from the autopsy. We know that the man has been arrested by the police.”

It was further gathered that Olugbore’s lawyer’s said the ex-SSA was not in his apartment at the time of the incident, adding that Kemi’s death was a domestic accident.

The Arobieke’s family lawyer, identified only as Olayiwola, stated that the result of the autopsy was with the police, adding that both families would be invited by the police.

The Osun State Police Public Relations Officer, DSP Folashade Odoro, confirmed the arrest. She added that investigation was ongoing on the matter.

“I don’t know about who is involved, but the suspect has been arrested by the police. Investigation is also ongoing on the matter. When things like this happen, the first suspect is the owner of the apartment. So, he was arrested immediately.”

The governor’s media aide, Mr. Semiu Okanlawon, when contacted declined to comment on the matter.