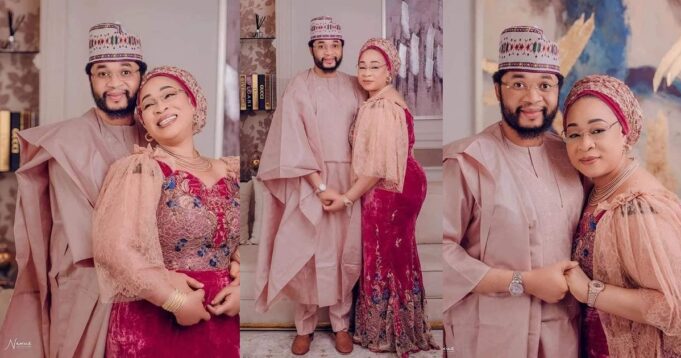 Photos of Hajia Hauwa, the wife of late Governor of Taraba State, Danbaba Suntai, and her much younger husband, Haliru Saad Malami, has been shared online.

It would be recalled that the late governor who was involved in a plane crash in October 2012 passed away in June 2017.

Mr. Suntai was taken to different hospitals around the world due to the brain injury he sustained from the impact of the plane crash but he sadly succumbed to the injury on June 28 2017, in Houston, Texas, United States.

Prior to his death, the late governor was said to be in a vegetable state and couldn’t perform any function.

Two years after his death in 2019, his wife got married to Malami, who is the Chief Executive Officer, ITBAN Global Resources LTd, and cousin of Turai Yar’Adua, wife of late Nigeria’s President, Umaru Yar’adua.

Hauwa is currently in her 50s while her husband is said to be in his early 30s.

Photos of them together were posted online by Nexus Photographer on Tuesday, July 12.

Mr. Suntai who survived a plane crash at the Yola Airport in 2012, passed on at his home where he was undergoing rehabilitation for brain injuries that arose from the plane crash.

The sad news has been confirmed by Emmanuel Bello, a former commissioner of information in the state.