Home Entertainment News Portable gets backing from MC Oluomo to move freely in Lagos amid... 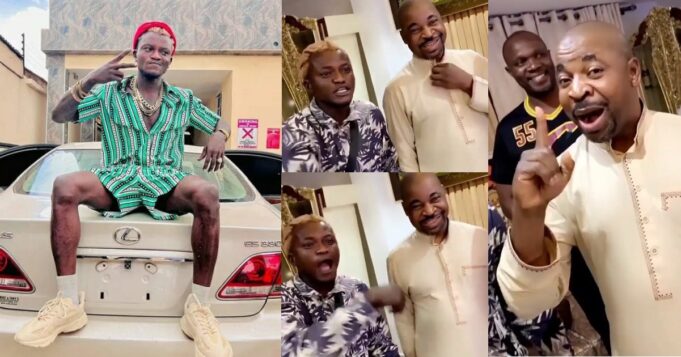 Controversial Nigerian singer, Portable has paid a visit to the chairman of the Lagos State Park and Garages Management, Musiliu Akinsanya better known as MC Oluomo, to secure his backing and protection.

This comes after the Inspector General of Police, Usman Baba, ordered the investigation of the singer over claims that he founded two deadly cult groups terrorizing Lagos.

Portable had in a video said he founded one million boys and Ajah Boys known for their notorious activities in many parts of Lagos and Ogun states.

In a new development, the singer who has been enmeshed in different controversies in recent times, met with MC Oluomo for protection following the alleged threats that trailed his claims.

In a video shared on his Instagram page, MC Oluomo told Portable not to be scared of those saying he should not set foot in some part of Lagos state because he has influence everywhere.

“You said he should not step foot in Agege, Lekki, and Oshodi; who are in those places if not us,” MC Oluomo said in part.

The well-known tout also assured the Zazuh Zeh star of his safety, while boasting that he has people in all parts of Lagos state.