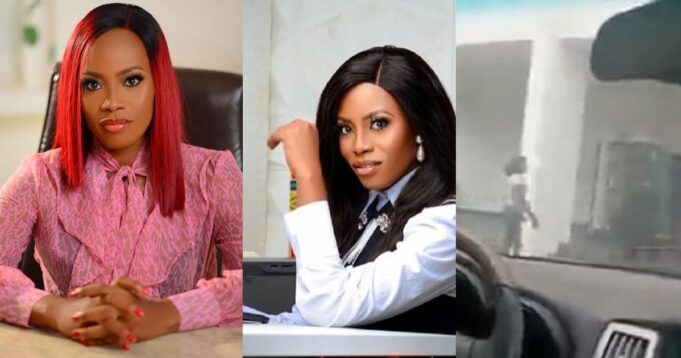 Popular social media influencer, Amanda Chisom, has reportedly been arrested by the police over her alleged involvement in a “N50bn” Ponzi scheme.

Amanda’s arrest followed a petition by a Port Harcourt-based lawyer, Azubuike Ihemeje, to the Economic and Financial Crimes Commission, EFCC, and the Nigerian Police over the defrauding of unsuspecting investors by one Marksman Chinedu Ijomah, the founder of Chinmark Group, and all the ambassadors who helped him convince the public to invest in the scheme.

Media personality, Chukwudi Iwuchukwu, who shared a video of Amanda arriving at the office of FCID in Abuja after she was arrested, said she might be detained for a long time based on a court order procured by the victims of the Chinmark heist that she was allegedly part of.

Update on Amanda Chisom’s arrest.
1) She was actually picked up on Tuesday morning from her residence by a team of crack detectives after her arrival from her Ponzi sponsored foreign vacation trip.

2) She is going to be detained for a long time based on court order procured by the victims of the Chinmark’s heist that she was part of.

As I type this, she has been singing like a canary bird about what she knows about the 50 billon Naira stolen by Chinmark and herself from innocent retail investors.

3) She would be charged to court after the conclusion of investigation by the team of crack of detectives currently interrogating/questioning her.

4) Her ordeal is a lesson to every young person including me.

There is no short cut to success.

The money from Ponzi is sweet but e dey hook for throat.

The hard way of building a brand/business from the bottom still remains the only sustainable way of being wealthy in Nigeria.

5)Attached below is a rare video of the ponzi queen walking majestically into the office of FCID in Abuja after she was arrested.

6) I will bring more updates as I receive them from my source.

Till then, Good evening every one!