Home Viral “All they do is press phone” – Moment wife confronted her sisters-in-law... 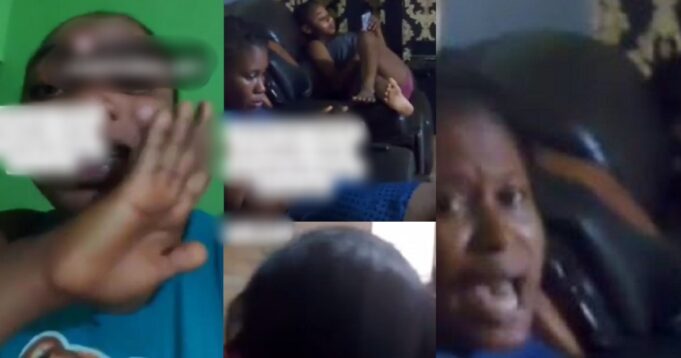 A viral video of a wife tackling her sisters-in-law for not helping with house chores has elicited mixed reactions from Nigerians on social media.

In the trending clip, her husband’s sisters, three of them, were on their phones in the sitting room as she frantically scrambled to prepare dinner for the family after just getting back from the market.

At some point, she apparently couldn’t take them lazing around while she did all the work, so she confronted them and captured the moment on tape.

Confronting them, she noted that they never help with the house chores, as all they do is eat, relax, and be on their phones while they leave her to do all the work alone.

One of the ladies, who was visibly not having it, told the ranting wife that she’s in her husband’s house and it’s her duty to do the house chores without any help from them.

“See them, dem dey here they press phone, upon say I don go market come back, look at them, people that will get married tomorrow. When I talk they will say I’m a bad person. Big girls they cant cook, they will leave everything for me, they want to kill me with work in this house”. she said in part.

The video has stirred varying reactions from netizens. While some agreed with the wife, others took to the side of the in-laws. See some comments as you scroll.

@Stallion wrote, “Leave the marriage nah?? You think say husband easy to find!! After them pay for your head you think you will move in and be commanding people to do house chores.. Make ogun seal your wide pussy der!! Do u know if your husband borrowed money from his sister to fund your marriage?? Mumu”.

@ore wrote, “Na so some sister-in-laws dey do. Na until u tell them say make them do something, before them go stand up dey squeeze face.”

@charlesejoke, “You dey celebrate anything… because I no understand the crowd in the name of you marry thier brother?”.

@donsingle___, “My sisters no fit try am fr my house😒….my wife is not a slave….She’s my wife not our wife😒….those girls get luck shaa cos dem go sleep outside if na me😡”.