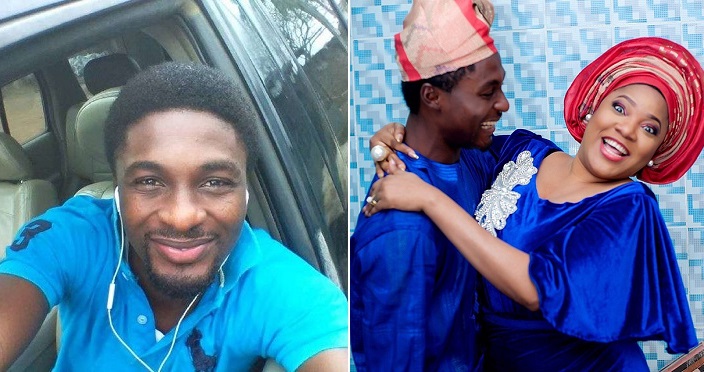 Adeniyi Johnson, The estranged husband of actress Toyin Aimakhu in a new interview with Sunday scoop has revealed he has no issues with the actress.

Read excerpts from his interview:

How did entertainment start for you?

It started for me about two decades ago when I started acting in church. My first major acting experience was when I was in secondary school and as students, we had to stage a play. But the person that was to play the lead role kept disappointing them as he didn’t bother to attend rehearsals. The teacher in charge of the drama group then said she needed someone else to play the role. A classmate of mine told her that I could do it because I was very funny and troublesome in school. That was how I was invited to take part in the play and I was able to do it well. After that episode, I became the happening guy in school and everybody wanted to associate with me. After I graduated, a friend informed me that some actors were shooting a movie close to where I was residing. I went there and took part in the audition. One of the producers, Ray Alechenu, took an interest in me and he told me to come for training. From there, I started acting in TV series and other productions.

What was the first movie you acted in?

The first Yoruba movie I acted in was Mo ta ka osi danu, and it was shot 11 years ago. It was produced by Lekan Ayinde and he was the one that brought me into the Yoruba movie industry. However, my breakthrough started when I delved into soap operas like Super Story and Family Ties, among others.

Entertainers are known to lead ostentatious lives, how do you avoid being caught in that web?

It’s not like acting isn’t a well-paid job. If it wasn’t, we wouldn’t be here because fame is not enough. The problem is that the expectation of people from actors is very high. But I will never live a fake life to impress anybody, and people who know me can testify to that. Meanwhile, if piracy can be curbed, actors would also fly private jets.

How much does it cost to make a proper movie?

It depends on how large the production is. Some could cost N5m or N10m. However in the industry now, people work more based on friendship and that reduces the cost. If you insist on charging what you think you’re worth, the producer would not be able to pay, because it would be difficult to recoup the money.

Do you belong to any association in the industry?

I belong to practically all the associations including AGN, TAMPAN, among others. I am a strong believer in this cause as I believe that it is only through entertainment that we can change the image of Nigeria for better.

What roles do these associations play in taking care of welfare of practitioners?

How much is in the purse of the association? Many actors are not faithful with payment of dues and levies, and that’s really the only way the associations can generate funds.

Is there any role you would love to play but haven’t?

I would like to play the role of a deaf and dumb person, and speak with sign language.

You usually play the role of a lover boy, is that your character off camera?

It’s a Nigerian thing that when you look good, you would play the role of a lover boy. At a point, I had to tell people that I enjoy playing a lover boy but I can do other things as well. Recently, I have acted as a tout, prisoner, imbecile, and played diverse roles. Now, they don’t cast me as a lover boy alone. Off camera, I love everybody around me and love to put smiles on people’s faces. If that is love, then I’m a lover boy. I love women and you can even make that your headline. Am I supposed to hate them? However, loving isn’t necessarily about the opposite sex.

Do you feel pressured to hide your relationship from the public?

What I showcase to the world is my talent and I have the right to my privacy. That is why I don’t talk about my personal life.

What then prompted you to go public about your relationship with Seyi Edun?

I have said all I have to say about that on Instagram where I described her as a good friend and confidante.

I like a woman that fears God and is hard-working. It is not about a pretty face and curvy shape; it is more about a woman who can pray together with you.

Does Seyi Edun fit that bill?

Why are you so particular about Seyi Edun? Why don’t you talk about other actresses that I have been linked to in the media? I don’t want to talk about my relationship.

Are you afraid that your relationship would be endangered if the public know about it?

Don’t people know about Olu Jacobs and Joke Silva? It is only if you want your relationship to be damaged that it will be. It is not necessary to put everything about your relationship out there. Some things are meant to be private.

Are you a spiritual person?

Yes, I am, and people who know me are aware of that. I have been a church boy from way back and I don’t joke with prayers; even Toyin Aimakhu can attest to it. Sometimes on set, I even organise vigils with spiritual colleagues like Woli Arole, Seyi Edun, among others.

Can you still work with Toyin Aimakhu?

Of course! There is no reason I cannot work with her. She is not my enemy and she didn’t kill anyone close to me. I have worked with her severally after our issue and the last time we were together on set was in 2016. We do whatever we have to do and go our separate ways.

You were recently given a car by Funke Akindele’s ex-husband, Kehinde Oloyede. What led to that?

It actually started as a joke. He was celebrating his birthday and he said he would give a car to whoever provides correct answers to some questions he would be asking on social media. I participated in it and I eventually won. I’m enjoying the car now and I am grateful to him.

What can you recall of your childhood?

I was born and brought up in Lagos and I’ve basically lived my whole life there. I wasn’t born with a silver or wooden spoon, but we didn’t have to beg anybody to eat. My childhood was pretty normal. When it was time to be stubborn, I was, and when it was time to read my books, I did.

What did you study in school?

I studied mass communication at the Ibadan Polytechnic. Later on, I went to the Lagos State University to study international relations. I have also undergone some training in acting. It is not really about what I studied in school, it is more about the inherent talent.