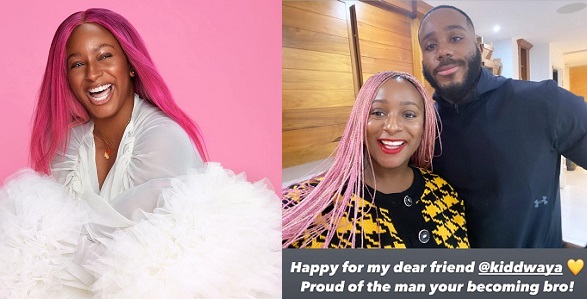 Cuppy who shared a photo of herself with the former Big Brother Naija housemate, revealed that she’s proud of him and his achievements.

She also stated that she’s thrilled at how well he has grown.

“Happy for my dear friend Kiddwaya. Proud of the man you’re becoming bro”

Recall that while Terseer Waya was in the Big Brother house, he disclosed that billionaire daughter, DJ Cuppy is one of the 3 women he is comfortable with and has equally shown his emotional side to.

Kiddwaya, stated that there were just three women he had shown his emotional side to in his entire life.

“Yes, there are three of them, my ex but it wasn’t enough to realize I was getting into it.

“My manager and probably Cuppy, so it’s just the three of them and that’s it. At least, I already said I wasn’t a robot”.

Similarly, during one of his diary sessions with Big Brother he gave a shout out to Cuppy, adding that she is one of his favorite girls.