Home Entertainment News UPDATED: “The news about Sara being my husband’s wife is completely false.”... 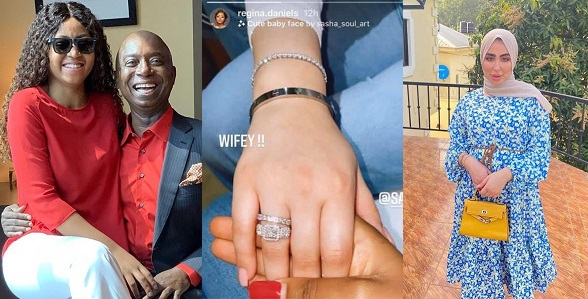 UPDATED: Billionaire Wife, Regina Daniels has finally reacted to reports that her husband, ned Nwoko has taken another wife.

Recall there were speculations yesterday that her husband Ned, may have engaged another wife, after an Arab woman, identified as Sara shared numerous photos of herself posing in Ned Nwoko’s mansion while wearing an engagement ring.

The lady with Instagram handle @Sar8al is UK-based but has been in Nigeria for some time.

Regina Daniels has been sharing her photos and videos on Instagram and Snapchat including one in which she flaunted her supposed engagement ring with the caption “wifey”.

Over the weekend, Sara was spotted with Regina Daniels in Abuja. She has also been chilling in the swimming pool in Ned Nwoko’s house and also cruising in cars Regina Daniels drives as seen in videos which Sara shared on her Instastory.

She has also been sharing photos at the billionaire’s house and tagged the location as “secret location”.

According to reports, she will also go through the traditional marriage rites just like Regina Daniels, as Ned Nwoko allegedly “believes in culture”.