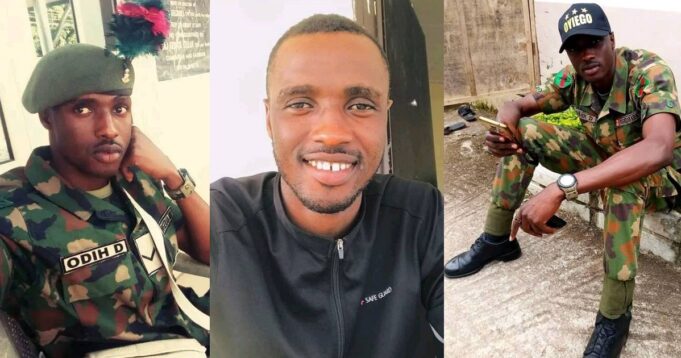 A Nigerian soldier, identified as Daniel Odih, has been killed by Boko Haram terrorists in Abuja just four days after his mother was murdered in Benue State.

Daniel was one of the soldiers killed during an attack on a military checkpoint near Zuma Rock on Thursday night, July 28.

It was gathered that the terrorists arrived Zuma Rock around 8:30pm and opened fire from different angles at the soldiers stationed at the checkpoint between Abuja and Niger State. Sadly, Daniel was one of the victims of the attack.

Writing in his tribute to the slain soldier, one Clement Excel said the deceased’s mother was killed by suspected herdsmen on her farm in Benue state on Monday, July 25.

“DOUBLE TRAGEDY BEFALL THE FAMILY OF LATE MR. SIMON ODIH OF OTUKPA. On Monday 25th July, 2022. His mother was gruesomely murdered in coldblooded by yet unidentified assailant right in her farm at Adumu Otukpa.

“Community and sympathies were thrown into mourning to unravel circumstances and perpetrators of the dastardly act.

“Tars flowed, hearts rended and bleed. Yet, Officer Daniel Odih could not had the opporturnity to mourn his MOTHER. Silently, he nurturned the brunt all alone. Hmmmm! As a brave soldier, He maintained his oath of office to defend his nation by whatever circumstances.

“Gallantly, he moved on dutifully in line of defence untill he paid the SUPREME PRICE for his NATION on 28th July, 2022 along Madala Zuba road at FCT, Abuja.

“OFFICER DANIEAL ODIH. Am in short of wods to express the vaccum you and your mother had created in the family. Both of you sunddenly left the world in a more tragic manner four days to each other. We love you both but God loves you most. May Almighty God grant both of you eternal rest in Christ Jesus. It is well with your soul.”

“I heard some soldiers were attacked last night at Zuma Rock checkpoint but I never knew it was you. We chatted yesterday and you were telling me how bad you felt about your mom who was killed three days ago in her farm. This is too hard for us Odih Daniel My heart is broken. RIP Oyine gallant officer, you’re a true soldier and you died at your POST,” he wrote.