Outgoing Senate president, Bukola Saraki, while delivering his valedictory speech on Thursday, June 6, has revealed the saddest day as a Senate President. 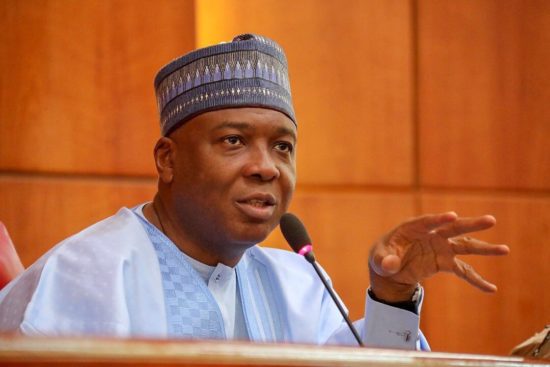 Before delivering the last speech of the day, Saraki firstly demanded his colleagues to observe a minute silence in honour of late Senators Ali Wakili (Bauchi South), Isiaka Adeleke (Osun West) and Bukar Mustapha (Katsina North) who passed away in the course of the eight Senate.

The outgoing Senate president expressed thanks to other Senators for their support even amidst trials, then revealed the saddest moment for him would remain the day the Senate was invaded and the mace stolen.

“DISTINGUISHED COLLEAGUES, LET ME THANK EACH AND EVERY ONE OF YOU FOR YOUR CONTRIBUTIONS TOWARDS MAKING THIS THE HISTORIC SENATE THAT IT IS.

“WHEN I THINK OF THE MANY TRIALS AND TRIBULATIONS WE HAVE FACED AS AN INSTITUTION, AND MY OWN PERSONAL TRAVAILS, PARTICULARLY AT THE CODE OF CONDUCT TRIBUNAL, I AM HUMBLED, BECAUSE NONE OF OUR ACHIEVEMENTS WOULD HAVE BEEN POSSIBLE WITHOUT THE SUPPORT AND COOPERATION OF THE ENTIRE MEMBERS OF THIS CHAMBER.

“THE INVASION OF THE NATIONAL ASSEMBLY BY ARMED SECURITY OPERATIVES IN AUGUST 2018 WILL LIVE IN INFAMY. THIS WAY DOWN THE LINE, HOWEVER, I REALISE THAT THE DAY OF THAT INVASION WAS THE SADDEST – BUT IN MANY WAYS, IT WAS ALSO A GOOD DAY FOR ASSERTING THE INDEPENDENCE OF THE LEGISLATURE AND THE TRIUMPH OF DEMOCRACY.

“IT ALSO TURNED OUT TO BE A SHOWCASE OF THE SPECIAL RELATIONSHIP BETWEEN THIS CHAMBER AND THE HOUSE, AS HONOURABLE MEMBERS STOOD IN UNISON WITH THEIR SENATE COLLEAGUES IN DEFIANCE OF THE INVADERS.