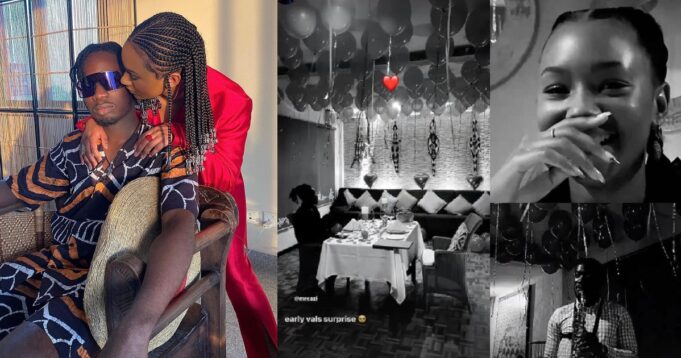 Popular Nigerian singer, Oluwatosin Ajibade better known as Mr Eazi, has treated his girlfriend, Temi Otedola to a pleasant surprise ahead of valentines.

Eazi surprised his lover, fashion entrepreneur and billionaire daughter with an early valentines dinner, alongside a saxophonists who played special love rhythm for her.

The lovebirds have taken to social media to share photos and videos from the romantic dinner.

This is coming after Eazi in a recent video showered praises on his girlfriend, Temi Otedola as he revealed she’s all he’s got.

In a video shared by the billionaire daughter on her Instagram page, Temi teased her boyfriend for coming out in his pajamas.

She asked Eazi why he wore a Pajamas out and in response, he said he does not have time neither does he have money to be going out in fancy clothes.

Speaking further, the singer gushed over his girlfriend and noted that although he has no money or time, he’s happy he has her.