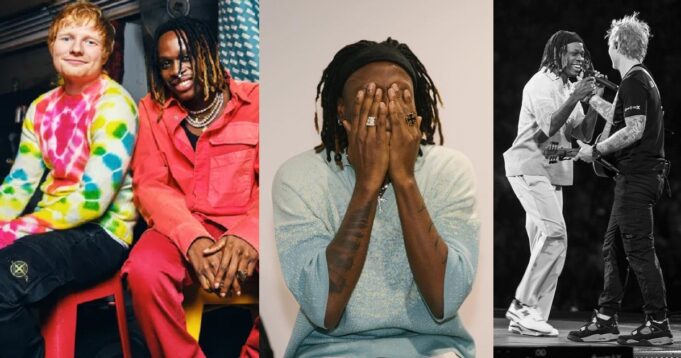 The YBNL singer who has been dropping back-to-back hits, joined British singer, Ed Sheeran, to perform their hit song, ‘Peru’, at the 90,000 capacity stadium on Wednesday, June 29, and it was indeed an electrifying performance.

After the performance, the ‘Vibration’ hitmaker used the opportunity to announce that his next album ‘Playboy’ will be released in August 2022, making it his third album since he rose to limelight in 2019.

However, the singer couldn’t control his emotions after the reverberating performance at the show and was moved to tears.

A video of the overtly emotional moment was captured on camera and is currently making rounds on social media.

Watch the heartwarming video below,

Watch a video of his performance,

Barely a week ago, Fireboy DML set another record by coming the first Afrobeat artiste to perform at a BET Awards.

The YBNL singer performed two of his hit songs on the main stage at the ceremony and becomes the first ever Afrobeats artiste to achieve the feat.

He is currently being celebrated on social media for being a part of the Afrobeats music and doing his incredible part in taking Nigerian music to the international space.