Nigerian singer and actress, Seyi Shay is currently trending on social media but not particularly in a good way but as a subject of ridicule over the judgement she gave a 17 year old boy during the Nigerian idol show.

The teenager, auditioning to be a part of the show, appeared before the show’s judges which includes Seyi Shay. After his performance, Seyi Shay was unimpressed and in her judgement, told him he’ll do well as a songwriter, but not as a singer cause he’s “terrible” at it.

For songwriting, hit me up, we could talk but that singing, it is not going to work. Sorry Darling” she said

Her comment has thrown her into the number one trending topic on Twitter as Nigerians react to it with many saying she was harsh on the contestant while others said she was objective.

Responding to the lambasting she’s been receiving, Seyi via her Twitter handle, wrote;

“I’m feeling like #JudgeJudy right now. You either LOVE her OR you HATE her, and that’s quite ALRIGHT! Either way, Thanks for the #1 trend tweeps” 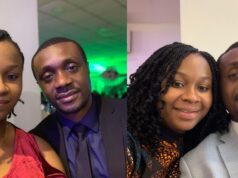