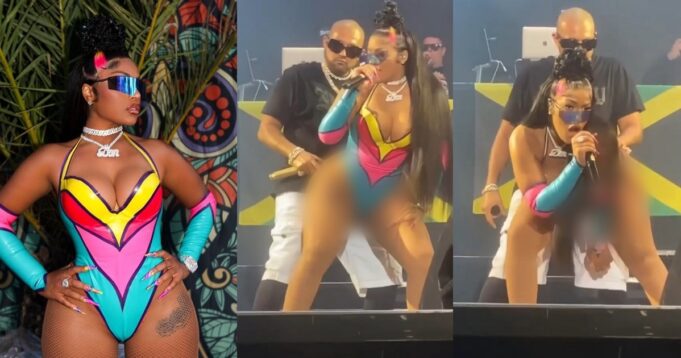 For a while, Burna Boy and Stefflon Don were an admirable item for about three years until their much envied relationship hit the rocks sometime in 2021.

The British rapper had a performance in Germany recently and while on stage, she had Jamaican rapper, Sean Paul performing with her as well and in course of their performance, the quite curvaceous rapper put on quite a show for the audience who were cheering her on as she grinded the Jamaican with her derriere.

She shared the video from the steamy moment on her Instagram page and this has caused a number of netizens to storm her page with reactions — most of which has to do with the state Burna Boy might be in after seeing the video.

A couple of days back, Grammy-award winner, Damini Ogulu, popularly known as Burna Boy revealed that his hit song “Last Last” is a heartbreak song.

The singer who had fans anticipating his forthcoming studio album “Love, Damini” revealed this in a video of him and his fans vibing to the song, weeks after his ex-girlfriend, Stefflon Don sampled the song to diss him.

Sharing the video, he wrote in the caption “when I make a heartbreak song but everyone is turning up to it”.