Home Entertainment News Stonebwoy pulls out a gun as Shatta Wale attacks him on Stage...

Stonebwoy was crowned the Vodafone Ghana Music Awards (VGMA) 2019 Reggae/Dancehall Artiste of the year. And in his speech, he told Shatta Wale in his face that this is the fifth he’s beating him to win the award.

An unhappy Shatta Wale and his fans had got off their seats and made their way to the podium, but were stopped by Stonebwoy and his fans and that led to a brawl. 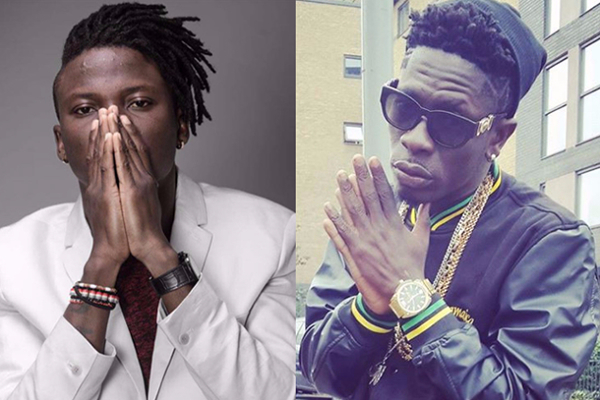 The event nearly turned bloody in the early hours of Sunday, May 19, 2019 if not for the intervention of some security operatives.

Stonebwoy was later handcuffed and whisked away.

The moment Shatta Wale stormed the stage with his Fans (Below):

Shatta Wale in reaction, took to social media to write;

You pull out Gun on innocent people ..Ghana police do your work !! This is called insecurity …it’s a shame Ghana music supports this arrogant cripple !!

If ghana police no collect your gun because of your trigger happy life ,I swear I will comot gun anywhere I see u and even if they cease my gun for doing that I will show you I have more guns ..Cuz you didn’t only threatened my life but the lives of people …

Imagine as you commot ,I commot ,what you feel say you cause.cuz I was told by the Law that until someone threatens to kill me with gun ,I should not take mine out …Ghana police do your work well I beg waaa cuz now sef people come give warning shots around my house

You no get leg to run but you are causing panic in public and everybody go run leave u if that shit happens ..Even you manager won’t stand by u …he will run 🏃🏾‍♀️🏃🏾‍♀️🏃🏾‍♀️🏃🏾‍♀️🏃🏾‍♀️

If Gh police don’t show you how to handle a gun erh . it will be nice when I meet u paa.cuz I don’t take gun out and pose.I shoot.Fool !!! Let your fans make u feel gangsta with that one leg .. it’s a disgrace I brought that demon in you for the world to see you are not an angel

You pull out Gun on innocent people ..Ghana police do your work !!
😂🤣🤣🤣
This is called insecurity …it’s a shame Ghana music supports this arrogant cripple !!