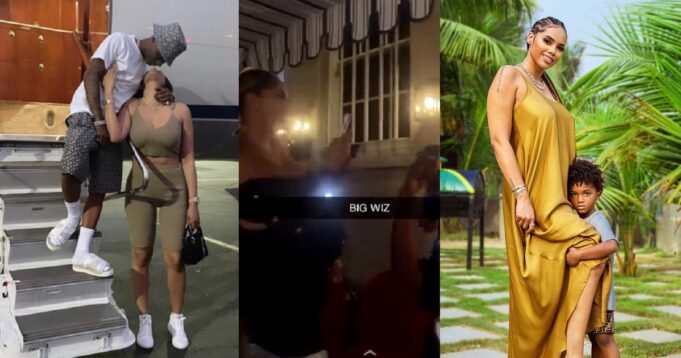 One of popular singer, Wizkid’s babymama, Jada Pollock has been spotted with a big baby bump at the singer’s birthday dinner held recently.

The Grammy-award winning singer turned 32 on Saturday, July 16, and held a birthday hangout with his close friends in attendance including singer Tems, and supermodel, Naomi Campbell.

In a video footage from the dinner shared on Snapchat by an acquittance of the singer, his babymama who doubles as his talent manager, Jada Pollock, was seen with a huge baby bump presumed to be the singer’s.

While there have been speculations that Jada is heavily pregnant, it was merely rumours however, this video seems to have confirmed that the singer is expecting his fourth child.

Meanwhile, Wizkid who already has three children with different women including Jada, has not commented on the pregnancy.

As expected, netizens has flooded social media with reactions about the celebrity couple expecting their second child together.

@nwunye_bigman1 wrote, “People that are married”

@rachael_smile wrote, “Congratulations.. so happy for them😍”

@teabhet wrote, “Women, why do this to yourselves? Permanent baby mama is no good. Any man that can’t respect you enough to marry you, is not worth your time”