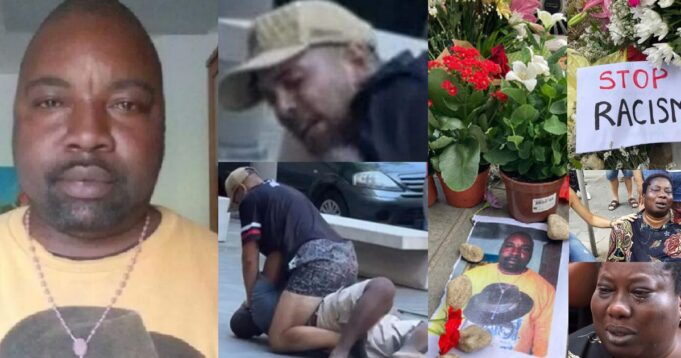 A judge in Macerata has ordered that the Italian man, Filippo Claudio Giuseppe Ferlazzo, who beat a Nigerian migrant to death in Italy, must remain in jail.

It was earlier reported that Alika Ogochukwu, a 39-year-old Italy-based Nigerian man, was attacked and beaten to death by Filippo on the streets of Civitanova Marche, a city located in the Province of Macerata, in the Marche Region of Italy, after he complimented his partner’s beauty.

The footage from the attack showed how the suspect, Ferlazzo, hit and choked Alika while people stood by and watched.

Ferlazzo’s lawyer, Roberta Bizzarri, said during Monday’s hearing her client cooperated with investigators, apologized for what happened, and had “clarified” that racism was not the motive.

Macerata prosecutors have also charged Ferlazzo with homicide and robbery, as he also allegedly took Alika’s phone after killing him, but racism was not cited as an aggravating factor.

However, Ferlazzo’s family said he had a history of mental health problems, which had led to his mother being assigned as his legal guardian by a court, ANSA Italy reports.

“Why wasn’t he being monitored even though he had a guardian?” said Francesco Mantella, the lawyer representing the deceased’s family.

“Apologies are not enough,” Alika’s family said via the lawyer. “What is needed now is justice, not vendetta. It’s difficult to understand what happened.”

Patrick Guobadia of the Nigerians in Italy association said that “if it had been two Italians, things would have turned out differently – someone would have intervened to separate them.”

The street vendor who passed away is survived by his wife and kid, who is eight years old. Also, he provided for a 10-year-old girl who lived with his family but was not a daughter.

The local council has, however, set up a fund of 15,000 euros to help the victim’s family.