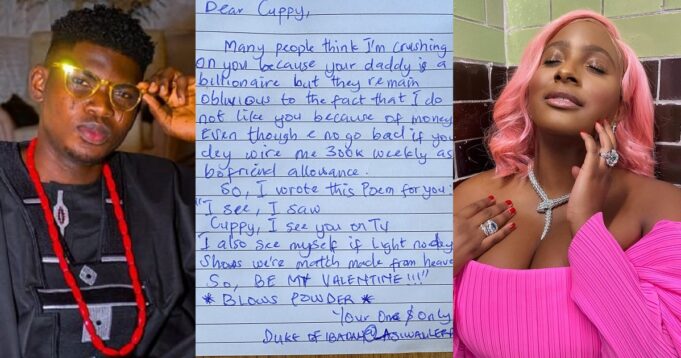 A man, identified as Akintomide Lanre Yusuff aka AsiwajuLerry, has gone wild with excitement after DJ Cuppy responded to his love letter on Valentine’s day.

The social media influencer has been known to have a crush on the billionaire’s daughter on micro-blogging platform, Twitter. AsiwajuLerry has been shooting his shots at her for a while and vowed never to give up until she notices him.

In celebration of the lover’s day, Asiwaju penned a humorous love letter to the popular disc jockey and noted that he was not crushing on her because of her father’s wealth.

However, he noted that he doesn’t mind receiving 300k for “weekly boyfriend allowance”.

Read the letter below,

Fortunately for him, the letter caught the attention of the singer, who quoted his tweet and replied with love and heart emojis. She also wished him a happy Valentine’s day.

Letter to My Love 🥰 pic.twitter.com/5Duv5jkWAW