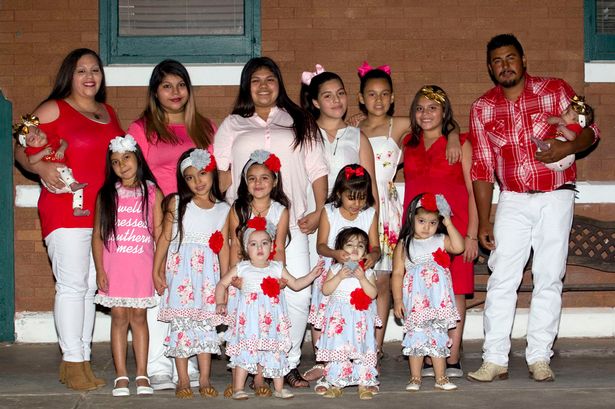 Augustina Higuera may just be 29 but she is very proud to be a mother of 14 girls! And if that wasn’t staggering enough, she beat odds of 500,000 to one to give birth to a third set of twins two months ago.

But the supermum is less thrilled that against all odds, all of her ­children are girls – and she has vowed to keep going until she has given husband Jose, 30, a son.

“We both really, really want a boy. We’d be over the moon, so we will keep trying.
“We’re besotted with the girls but Jose is outnumbered and it would be nice to even things out. I’m lucky that I enjoy being pregnant. I’ve never had any major problems, so it’s not a big stress for me.
“I’ve had so many girls I’m not sure what I’d do with a son. I just know I’d be blessed to have one. He and Jose would have an incredible bond. I hope I can give him that.
“I have no upper limit on how many children I’d have. I’d have another 10 if it meant having a boy.”

When Augustina gave birth to her second set of twins, Hailee and Braelee, less than two years ago, doctors joked she was more likely to win the lottery than have another multiple pregnancy. But she conceived youngest children Bella and Isabella weeks later.

Shortly after their birth, she did 42 loads of washing in 24 hours. She makes eight different meals a day and takes her kids to school in a minibus. And despite surviving on two hours of sleep a night, Augustina wouldn’t change a thing.

“It’s chaos looking after 14 girls but we wouldn’t have it any other way. I’ve always wanted to be a mum. When I was younger, I spent a lot of time looking after my younger brother and sister. Although twins run in my family, I never expected I’d have three sets. I know we’re blessed.”

Augustina, from Paris, Texas, got pregnant the first time she had sex, with teenage boyfriend Antonio. 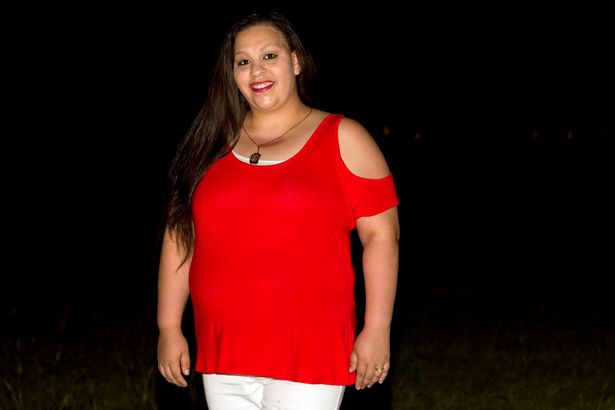 “I was shocked and terrified. I was so young and I didn’t know what to do. But I’m a Christian, so abortion was never an option. And we were very lucky as both sets of parents supported us.”

“My older girls were not planned.
“Every time I got pregnant, I was shocked. I tried all types of contraception but something always went wrong. But when the girls were born, I was always over the moon.”

Augustina and Antonio married when he was 17 and she was 15, as Texan law permits those over 14 to wed with parental consent.

But their relationship broke down shortly after Vanessa’s birth and when she was four months old, Augustina met Jose at a party. Daniela, now nine, came along when they’d been together just over a year and Cilla, seven, followed.

Then, six years ago, she found out she was expecting yet again – and was shocked to see a second foetus at her first scan.

“I looked at the screen and thought one must be a cyst before it sunk in. I almost passed out with shock and excitement.
“I was scared but happy. When I showed Jose the photo it took him a few seconds to realise there were two babies. He burst into tears of happiness.” 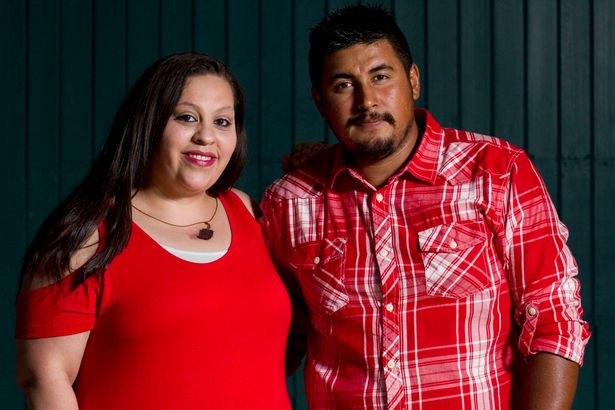 Augustina felt sure at least one of the babies would be a boy. She said:

“The doctors told me it was more common to have a boy and a girl than same-sex twins. I let myself get excited.
“We found out the sex at one of my scans and it was two girls – I guess I should have known. We don’t let ourselves get upset as we feel so lucky to have healthy babies. But it doesn’t mean that we don’t want a boy.”

After Luzelena and Marielena, six, arrived, Analilia, four, and Aravelia, two, followed. And just three months after Aravelia’s birth, Augustina had another positive test. This time, she wasn’t shocked to learn it was twins.

“I just had a feeling. I went to hospital with stomach pains and they suspected a kidney infection but couldn’t do anything until they scanned the baby. The doctor was staring at the screen looking puzzled. Eventually, he said both babies were fine. I was right.”

The girls were just weeks old when Augustina began to suspect she was pregnant yet again. And her doctor suggested she was further on in the pregnancy than she had thought.

“I knew I’d got my dates right and then it sunk in. I was having more twins. The doctor said there’d be more chance of a lottery win. But a scan found there were two.

“I was still stunned as the odds on having three sets are so high. I did wonder if one might finally be a boy.”

But it was not to be and two months ago, Bella and Isabella arrived. 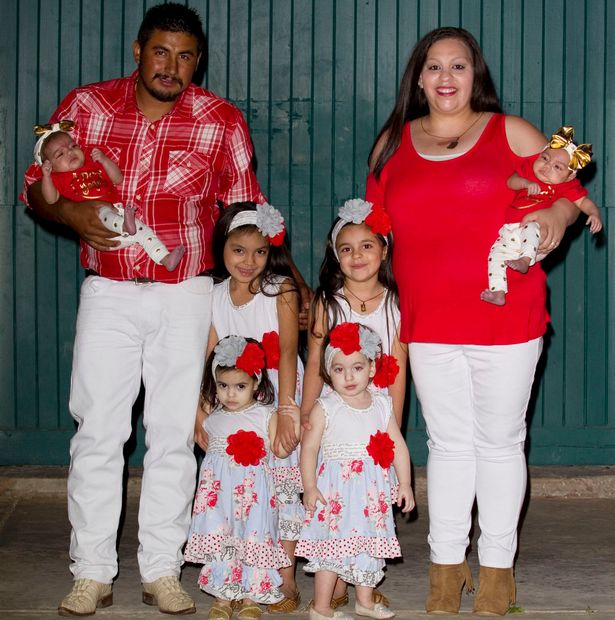 With 14 daughters, Augustina and Jose do not rely on welfare to support their family as he earns £6,000 a month running a landscape gardening firm.

“Jose works seven days a week to support us. For now, I’ve had a contraceptive coil fitted but I think we’ll start trying for another baby when the youngest are four.”