Award winning Nollywood actress and producer, Funke Akindele has nicely replied a fan who gushed over her wealth.

Funke had earlier taken to the micro-blogging platform, Twitter to beckon on her colleague, Eniola Badmus to embark on a trip to Dubai together, alongside their fans.

“@eniola_badmus no well!! #dubai was fun!! Eniola make we go back dubai with our fans o!! #jenifans #takemebacktodubai #mydsf”, she tweeted.

In reaction a fan expressed surprise at the way celebrities embark on various trips abroad. “All these rich rich people shaa. See as she dey mention Dubai like say Na Bariga to Oshodi”. He wrote.

Replying to his tweet, the successful actress encouraged the fan to remain hardworking and consistent while she noted that she also had the same mindset before until things changed for the better. 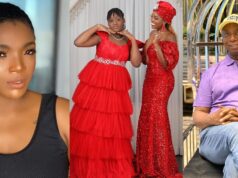