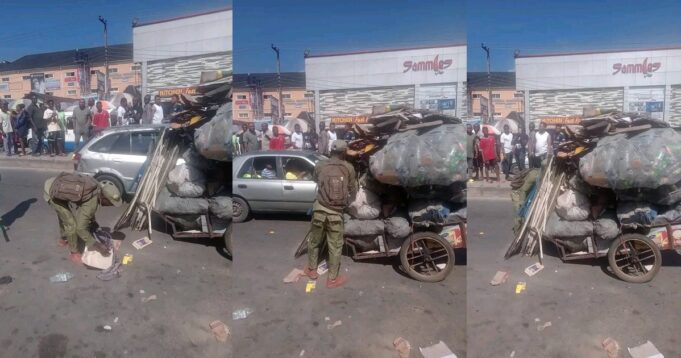 Pictures of a young Nigerian man fully kitted in NYSC khaki and boot pushing a heavily-loaded truck has gone viral on social media.

In the pictures reportedly taken at Choba Junction in Port Harcourt, Rivers State, and shared on Facebook by UNIPORT CCTV, the man is seen pushing a truck loaded with plastic bottles.

Some residents of Port Harcourt also claimed they saw the young man on Tuesday, August 2.

Meanwhile, it’s not clear if the man is a serving member of the National Youth Service Corp (NYSC).

In other news, a lady has taken to Twitter to narrate how a mother with a newborn baby reported her husband to the National Drug Law Enforcement Agency (NDLEA) for dealing drugs.
According to @Boluxxxx on Twitter, when NDLEA officials came to search the couple’s house, they found cocaine underneath the bathtub.

She said the woman in question is her friend’s neighbor and she moved into the compound with her husband few months ago.

However, the husband’s dealings were quite suspicious because people used to come with different cars to visit him before he was reported to the NDLEA by his wife.

“NDLEA came to carry my friend’s neighbor’s husband. Apparently na the wife report am. They sha found cocaine under the bathtub. He was dealing. And they have a newborn.

You see this our country as it is? We deserve it. We are us, we are our leaders. That’s us.