1 million naira up for grabs in Infinix’ #ExploreAnotherMe challenge. You can be one of the Lucky 7 winners to have a share – Here’s how. 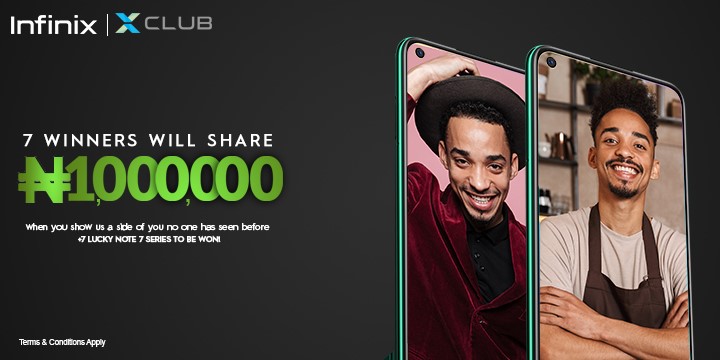 Hi guys, let me introduce you to a friend of mine. Meet Deji; he’s a professional basketballer, a graceful writer, and an amazing cook. When he’s off the court, out the kitchen and without a pen, he’s usually hanging out with his daughter who he teaches how to play the guitar. That’s a lot of talent for one person, right? Now, that right there is why I love humans; our versatility.

Many of us have multiple talents but more often than not we put some on the spotlight while others remain hidden. Who could have thought that the legendary Kobe Bryant was also an amazing writer? Well, he did win the Academy Award for Best Animated Short Film in 2018 with a film titled “Dear basketball” which was based on a poem that he wrote when he announced his retirement from the NBA. You think that’s amazing? I also agree, and there are many more stories that prove the same fact. Interestingly, you also can add to that thousand-page-long book of stories and win some cool cash while at it.

In a quest to bring out hidden talents and potentials from Nigerians, Infinix mobility has launched an online campaign tagged #ExploreAnotherMe. Through this campaign, Infinix intends to encourage people to show the world another part of themselves. And just like always, they’re not doing this without a reward as a total of ₦1,000,000 (one million naira) cash prize is up for grabs and you can be among the 7 lucky winners to get a share of this cake.

To participate, interested individuals are to make a short video that shows them doing something other than what they are known for. It could be joggling, knitting, swimming or scoring a jaw-dropping shot in a basketball net from a long distance. Any of these things will count as a valid entry, provided that they’re not your most projected skills. (i.e. you do not show this side of yourself regularly).

After creating the video, participants can make their entries by posting on any social media platform, including; Facebook, Twitter, Instagram, TikTok, and Likee, using the hashtag #ExploreAnotherMe and #ExploreInfinixNote7. Also remember to follow and tag Infinix @Infinixnigeria in your posts to get noticed on all social media and short video platforms.

Participants can also post their entry video on Vskit and Xclub HERE.

The challenge ends on the 19th of June 2020. So, get on with it! Join in and explore another you. Show the world that other intriguing side and you might just be well on your way to becoming a winner in the #ExploreAnotherMe Challenge.

For more information on this, visit Infinix on any of their social media platforms @Infinixnigeria. You can also visit the Xclub platform via the Xclub app if you own an Infinix device or simply log on to https://wap.infinix.club for non Infinix users.