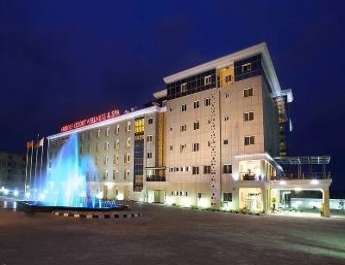 Dame Patience Jonathan, the wife of ex Nigerian President Goodluck Jonathan, may lose to the Federal Government, a N10bn hotel allegedly belonging to her if she fails to explain how she came about some funds allegedly traced to her accounts.

An EFCC spoke to Punch yesterday:

“This is one of the questions she may have to answer as the Economic and Financial Crimes Commission continues investigation into the $20m found in five accounts she has laid claim to.

The hotel, which is known as Aridolf Resort Wellness and Spa, Yenagoa, was inaugurated by Patience in April 2015, barely a month before the end of her husband’s tenure

According to a UK business newspaper, The Financial Times, the hotel, which has imported state-of-the-art furniture, can compete with other luxury hotels in developed countries.

The Chairman, Presidential Advisory Committee Against Corruption, Prof. Itse Sagay, told the publication that the EFCC had the right to investigate anybody who was living above his or her means as he wondered how Patience, who was a civil servant and never held any government position, could have billions in her bank accounts. He said:

“The EFCC and ICPC Acts have provisions under which they can ask the court to freeze the account of a person if a person’s capacity to earn is below the amount of money that the person appears to have.

“If you are living a lavish lifestyle and it appears you don’t have the means to have acquired the property and the wealth you have, the EFCC is free to probe you.”

Dame Patience recently sued Skye Bank and the EFCC for freezing four company accounts which have a balance of $15m.

The former first lady also has another account with the title, ‘Patience Ibifaka Jonathan’ which has a balance of $5m. The account is, however, still active.