Home News Another 98 Nigerians From Edo State Return From Libya

No fewer than 98 Edo indigenes arrived in Benin from Libya on Friday with the help of the International Organisations for Migration (IOM) and the state Government. 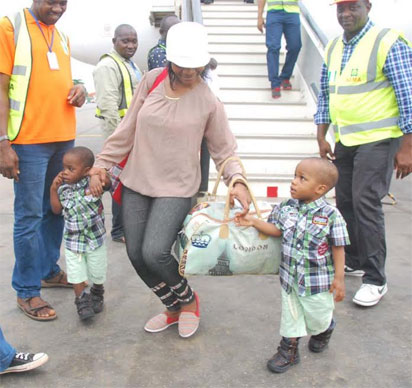 A mother and her kids among the 164 returnees from Libya facilitated by International Organisation on Migration and National Emergency Management Agencyon arrival at the Murtala Muhammed Airport, Ikeja, Lagos on Thursday dMrs Abieyuwa Oyemwense, Secretary to the state’ Task Force against Human Trafficking who confirmed the number to newsmen said the entire number that arrived were males.

Oyemwense said: “This is the eighth batch that we have so far received. We are going to keep them in the hotel for two nights after which they will be reunited with their families.

“Government has set up programmes to train them in different skills, and those who wish to return to school will be assisted to do so.

“In addition, government is also paying them monthly stipends for three months’’.
Oyemwense said they were expecting another batch on Wednesday.